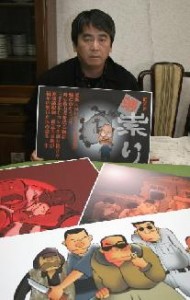 "The Ants' Grudge," a story from Kodan, a traditional form of Japanese storytelling, has been turned into a picture-story show. The story was originally created by Hiroyuki Kubo (whose stage name is Kankyusha Kumosuke), 77, a resident of Kure City and a Kodan storyteller who tells stories about the atomic bombings. The show may be performed in New York when the Nuclear Non-proliferation Treaty (NPT) Review Conference is held there next May.

The story involves ants that have eaten scabs from the bodies of two children who suffered the atomic bombing of Hiroshima. The ants then spread an itchy rash among the people in power, such as the American scientists and military personnel who were responsible for the development and manufacture of the atomic bombs. Hidenobu Fukumoto (whose pen name is Ikumasa Teppei), 53, an illustrator who lives in Hatsukaichi City, Hiroshima Prefecture, hand-drew the pictures and added color using his computer. The show consists of 38 cards, each 30 centimeters long and 40 centimeters wide.

"Initially, I hesitated, wondering if I, someone who wasn't an A-bomb survivor, could fairly express the survivors' resentment," said Mr. Fukumoto. But this past July, Keiji Nakazawa, a manga artist known for his work "Barefoot Gen," visited Hiroshima and told him: "It is important to vent one's bitterness in order to move forward with a wish for peace." Mr. Nakazawa's words encouraged him to pursue the project in earnest.

He added some elements to the original version of the story, such as President Obama's speech last April calling for a world free of nuclear weapons. In the new story, President Obama alone escapes the infection. Mr. Kubo, the storyteller, commented, "I hope audiences will see forgiveness in this fable featuring ants, as well as the resentment and tragedy caused by the atomic bombings."