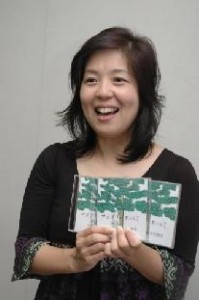 "The small buds of the A-bombed tree, they give my life energy," sings Ms. Nakamura on the CD of her song, accompanied by the gentle guitar playing of Henri Mirai, 56. Ms. Nakamura said the idea for the song came as a result of meeting Suzuko Numata, 86, an A-bomb survivor and a resident of Minami Ward, Hiroshima, who has been telling the story of the A-bombed tree. She wrote the lyrics and music to the song in August, while observing a seedling of a third-generation Chinese Parasol Tree planted in her garden.

In 1986, Ms. Nakamura took part as a volunteer in a campaign to convey experiences of the atomic bombing in the United States. She began holding live performances this past June on the theme of Hiroshima and Nagasaki, hoping to hold 1,000 such concerts.

"I hope we will have realized a peaceful world by the time the third-generation seedling has grown into a tree," she said.

The CD of the song is priced at 1,000 yen and can be ordered at the following address: info@musevoice.com