Obama visits Japan for Japan-U.S. summit, pledges to work toward "a nuclear-free world" 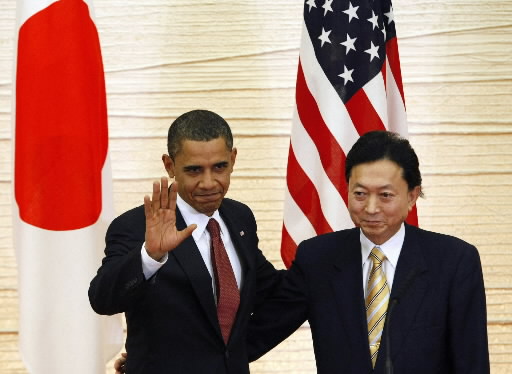 On November 13, U.S. President Barack Obama visited Japan for the first time since assuming the U.S. presidency, and held talks with Japanese Prime Minister Yukio Hatoyama. The two leaders released a joint statement in which they vowed to work toward the realization of the total elimination of nuclear weapons in pursuit of "a nuclear-free world." They also agreed to "deepen the Japan-U.S. alliance."

At the meeting, Prime Minister Hatoyama encouraged President Obama to visit Hiroshima and Nagasaki, saying, "The Japanese people are hoping you will visit these cities. I share the same hope that you will undertake such a visit when you have the chance." Mr. Obama explained that he had no immediate plan to travel to the A-bombed cities, which would make him the first sitting U.S. president to do so, but he added that a future visit would be "an honor." At their joint news conference, President Obama also mentioned that "it would be meaningful for me to visit those two cities in the future."

Regarding the transfer of the U.S. Marine Corps Air Station Futenma in the city of Ginowan in Okinawa Prefecture, the two leaders agreed to reach a conclusion at their ministerial working group at an early date. Prime Minister Hatoyama said, "We want to reach a conclusion as early as possible," while President Obama said that the implementation of the current plan was preferable and that he hoped to settle this issue swiftly. They also confirmed their cooperation for a successful 15th Conference of Parties of the United Nations Framework Convention on Climate Change.

Mr. Hatoyama outlined a new package of assistance measures worth five billion dollars, or about 450 billion yen, for the reconstruction of Afghanistan over five years from this year. Mr. Obama expressed his gratitude for this offer. With regard to measures against global warming, the two leaders confirmed their policy of reducing their nations' greenhouse gas emissions by 80 percent by 2050.

Prime Minister Hatoyama proposed "a constructive and future-oriented Japan-U.S. alliance." In response to this remark, President Obama said that the Japan-U.S. alliance was the axis of efforts toward stability in the Asia-Pacific Region. Mr. Hatoyama explained that the axis was a prerequisite for the vision of the East Asian Community, which he has advocated. "We hope that the U.S. presence in Asia will grow," the prime minister said.

Concerning North Korea, Mr. Hatoyama conveyed his support for U.S. special representative Stephen Bosworth's visit to that nation, and confirmed Japan's cooperation with the United States in pursuit of resolving this nuclear issue. This is the second Japan-U.S. summit, following the first meeting in September. President Barack Obama arrived at Narita Airport by presidential plane on the afternoon of November 13.

Efforts to realize President Obama's visit to Hiroshima and Nagasaki
Hiroshima Mayor Tadatoshi Akiba commented: “We wish to welcome the fact that the United States, the only nation to have used nuclear weapons, and Japan, the only nation to have suffered nuclear attack, have joined hands and announced their determination to lead the world toward the elimination of nuclear weapons. We hope President Obama's visit to Hiroshima and Nagasaki will be realized as early as possible. We will make efforts to create an environment conducive to his visit."

The leaders of Japan and the United States have agreed to work together in pursuit of "a world without nuclear weapons." Though the content of their joint statement breaks little new ground, the fact that, 64 years after the bombings, the leader of the nation which dropped the atomic bombs and the leader of the A-bombed nation have pledged to undertake efforts to eliminate nuclear weapons is highly significant.

The joint statement begins by declaring: "Recognizing the challenge to achieve total elimination of nuclear weapons, the Government of the United States and the Government of Japan plan to work actively to create conditions for achieving this objective." With the leaders of the world's nuclear superpower and the only nation to have suffered nuclear attack taking up nuclear weapons as a theme of their summit, and sharing the vision of nuclear abolition, this is a deeply meaningful development.

However, with regard to nuclear disarmament and nonproliferation, what attracts attention are the sections that summarized familiar problems, and new efforts are not found. At a news conference following the summit, U.S. President Barack Obama acknowledged that the abolition of nuclear weapons was a long-term goal, indicating it may not be achieved in his lifetime, and that the United States would maintain its nuclear deterrence as long as nuclear weapons existed. He made the same statement in his speech in Prague this past April.

Still, the most pressing task for a world beleaguered by continual worries over nuclear proliferation, such as preventing North Korea from developing a nuclear arsenal, is swift action by the international community, which has set nuclear abolition as a definite aim.

The starting point of fresh discussions between Japan and the United States should involve questioning the purpose for the continuing existence of the "nuclear umbrella." More precisely, such questioning should place the U.S. nuclear deterrence within the framework of the Japan-U.S. security partnership so that the nation's leaders can also resolve the issue of transferring the U.S. Marine Corps Air Station Futenma.

Regrettably, President Obama himself made remarks which implied that a visit to Hiroshima and Nagasaki in the near future will be difficult. If the nuclear superpower and the A-bombed nation are to strengthen their partnership in efforts to advance the abolition of nuclear weapons, they should first face the reality of the damage wrought by the atomic bombings.