Obama shies from commenting on atomic bombings in visit to Japan 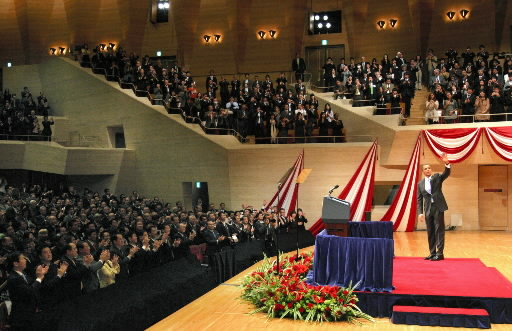 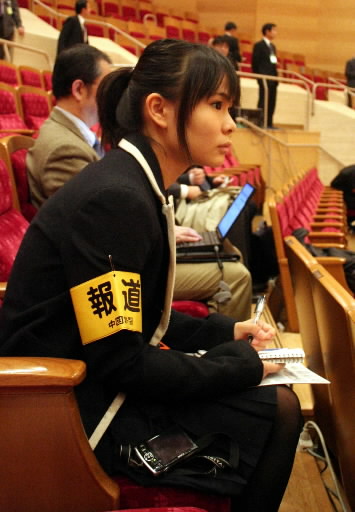 The 23 hours of U.S. President Barack Obama's first visit to Japan since taking office have highlighted the gap between his agenda as leader of the nuclear superpower and the reality of the challenge. Although the president expressed his desire and his intention to pursue "a world without nuclear weapons," he did not share his perception of history in regard to the atomic bombings. Asked about a possible visit to the cities of Hiroshima and Nagasaki, Mr. Obama simply responded that such a visit would be "an honor." Behind the scenes, hurdles still remain between the U.S. president and the A-bombed cities.

In describing his administration's policies toward Asia in a speech delivered November 14, President Obama stated: "We are pursuing a new agreement with Russia to reduce our nuclear stockpiles. We will work to ratify and bring into force the test ban treaty." Whenever the president mentioned such concrete measures, the audience responded with a round of applause. From time to time through his inspiring address, which echoed the speech he made in Prague in April, the applause lingered for long moments.

Nagasaki Mayor Tomihisa Taue, who was invited to the hall, praised Mr. Obama's remarks, commenting, "The president declared that we must seek a future without nuclear weapons and he has been taking action toward this goal. I believe we are moving forward, step by step."

Hidenao Nakagawa, former secretary general of the Liberal Democratic Party, welcomed the speech, saying, "The president's message for eliminating nuclear weapons, with Japan and the United States taking the lead, was strong." Mr. Nakagawa is a Diet member elected from the Chugoku area constituency, which includes Hiroshima.

At the summit meeting held November 13, Mr. Obama responded to photographers with a broad smile and nodded a number of times as he listened to Prime Minister Yukio Hatoyama's remarks. The president also displayed a sense of humor in his answers to questions.

However, in response to a question about visiting the A-bombed cities, the president's reply was more elusive. "I don't have immediate travel plans," he said, "but it's something that would be meaningful to me." And when a reporter asked Mr. Obama if he agreed with the decision to drop the atomic bombs, the president did not respond to the question, which had been included among several questions posed by that reporter.

Yasushi Akashi, former undersecretary-general of the United Nations and the first director of the Hiroshima Peace Institute of Hiroshima City University, assessed the speech and said, "President Obama must give due consideration to U.S. conservatives. I suspect the president is unable to clearly state his political wishes at this stage." Mr. Akashi believes this is partly due to the fact that the notion of the atomic bombings as justified is deeply rooted among the American public. He also attributes current domestic affairs in the U.S., including congressional resistance to health care reform as well as the high unemployment rate, which stands at over 10 percent, for making the president more circumspect.

At the same time, Mr. Obama's sincere stance toward eliminating nuclear weapons, a stance not seen in his predecessors, has been made clear. To realize a visit by the president to Hiroshima and Nagasaki, the A-bombed cities must continue to make this appeal.

Seira Furukawa, 16, a second-year high school student and a resident of Hiroshima, covered the speech made in Tokyo by U.S. President Barack Obama as a junior writer for Peace Seeds. Peace Seeds is a peace newspaper produced by Japanese teens in Hiroshima and published as a regular insert in the Chugoku Shimbun. Along with roughly 100 professional reporters and photographers, Ms. Furukawa took a close look at the leader of the superpower and wrote the following comment below:

I can clearly see the podium, though it is located over 50 meters away from the seats reserved for reporters. At 10:05, U.S. President Barack Obama walked onto the stage and the invited guests welcomed him with applause. When the president began speaking, saying, "It is a great honor to be here," the audience again broke into applause.

I clearly felt the popularity of the president. Mr. Obama has a deep, resonant voice. I found his speaking style very powerful, as when I have seen him speak on TV.

In his address, which lasted about 30 minutes, the president commented on the importance of eliminating nuclear weapons. I was delighted to hear it. At the same time, I was a bit disappointed that he did not touch on visiting the A-bombed cities. I felt the president should have mentioned specific measures for eliminating nuclear weapons, as this was his first visit to the A-bombed nation since taking office.

After his speech, the audience gave Mr. Obama a standing ovation. The president responded with a smile and left the stage in an unhurried manner. I hope that one day I will see President Obama again in Hiroshima.

U.S. President Barack Obama recently visited Japan. Since he had made it clear, before the visit, that he would not visit Hiroshima or Nagasaki on this occasion, we decided to go to Tokyo to listen firsthand to his speech given on November 14.

In a drizzling rain, even two and a half hours before the speech, invited guests and the media were already flocking in front of the entrance to the venue. Each time a well-known figure arrived, such as a Diet member or celebrity, the TV cameras crowded around them. Everyone was looking forward to hearing what President Obama would say, especially since his speech in Prague in April was considered a historic address.

A junior writer for Peace Seeds, who heard the speech in person, seemed to share this feeling of expectation at the beginning. However, she came out with a disappointed look, saying, "The president did not mention Hiroshima." Though she was not far away from the president when he spoke, she apparently felt a sense of distance. "He was further away than I thought," she said.

The junior writers launched their effort to invite President Obama to Hiroshima last November when he was not yet in office. They collected 335 letters addressed to Mr. Obama from readers and delivered them to the White House this past July. Each letter was full of the frank desire of citizens, appealing to the president to visit Hiroshima.

We understand that certain political and diplomatic issues remain large obstacles, such as the question of the responsibility of the atomic bombings and U.S. public opinion. But Mr. President, I still hope you will read the letters that were delivered to you from the citizens of Hiroshima.