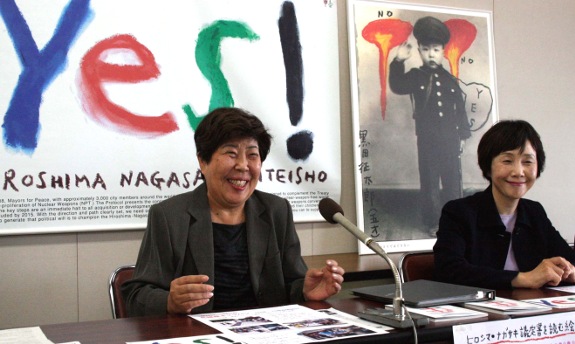 On November 16, the "Yes! Campaign," a Hiroshima-based citizens' group, held a news conference at Hiroshima City Hall and reported that an illustrated book on the "Hiroshima-Nagasaki Protocol," which provides a roadmap for the abolition of nuclear weapons by 2020, has sold over 10,000 copies in the roughly three and half months since the book was published.

Atomic bomb survivors (hibakusha) who are members of the group have been selling the book during the "Caravan Team" project, a national tour which seeks to publicize the protocol. The hibakusha have visited eight prefectures so far: Hokkaido, Tokyo, Saitama, Kanagawa, Hyogo, Okayama, Tottori, and Shimane. Maeko Nobumoto, secretary general of the group, stressed, "We are sensing the growing momentum for nuclear abolition."

The illustrated book, which consists of a clear explanation of the protocol and pictures created by Seitaro Kuroda, a well-known artist, aims to deepen the public's understanding of the measure. The group now plans to print 10,000 more copies.

Additionally, in the hope that the Hiroshima-Nagasaki Protocol can be adopted at the Nuclear Non-proliferation Treaty (NPT) Review Conference next May, the group will call on the Japanese government to propose the protocol to the conference as a subject for discussion.