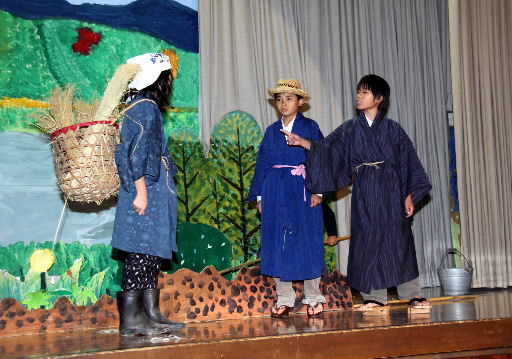 Twelve sixth grade students at Takafuta Elementary School in Zinseki-Kogen Town, located in the eastern part of Hiroshima Prefecture, will perform a play based on Masuji Ibuse's novel Black Rain at their school on November 21. Through the novel, the students learned about the connection between their town and the atomic bombing, and organized the play to express their wish for the abolition of nuclear weapons.

The main theme of the play concerns the suffering of the late Shizuma Shigematsu, who was from Zinseki-Kogen Town and served as the model for the novel's protagonist, and his family due to the aftereffects of radiation during the post-war era. The scenes will include one in which Shizuma, unable to work because of the aftereffects, was criticized by the townspeople and another where Shizuma's niece was rejected in an arranged marriage because she was exposed to the black rain.

The children interviewed Fumihiro Shigematsu, 73, an adopted son of Shizuma, then wrote the playscript. They have been rehearsing for one hour every day since October. In addition, they have learned about the devastation wrought by the atomic bombing from neighbors who had entered Hiroshima City after the bombing.

Tadafumi Okamoto, 11, said, "I would like to accurately express the suffering of A-bomb survivors who have been living with the fear of the aftereffects of radiation."