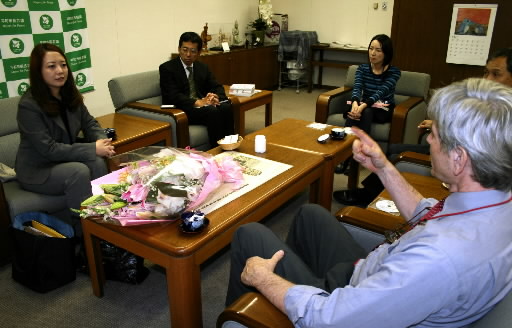 On November 25, Yumi Tanaka, 41, who has been engaged in peace activities in New York City, met with Steven Leeper, chairperson of the Hiroshima Peace Culture Foundation, at Hiroshima Peace Memorial Museum. Ms. Tanaka reported on an A-bomb exhibition that she organized in New York in October.

The A-bomb exhibition was held for two weeks at a church in the city. Emiko Okada, a peace volunteer at Hiroshima Peace Memorial Museum and resident of Higashi Ward, Hiroshima, went to the exhibition to describe her experience of the atomic bombing. Ms. Tanaka shared the results of a questionnaire given to visitors to Mr. Leeper, including the words of an eight-year-old boy who said that nuclear weapons should never be used again.

When Mr. Leeper appealed for Ms. Tanaka's support in anticipation of the Nuclear Non-proliferation Treaty (NPT) Review Conference to be held at United Nations headquarters in New York next May, she replied that she wanted to help people from Hiroshima by serving as an interpreter for them.

Ms. Tanaka is originally from the city of Yokohama. Since visiting the venue of the 2005 NPT Review Conference, she has been involved in activities to convey the reality of the damage caused by the atomic bombings, while working for a trading company. She has read aloud A-bomb-related poetry both in Japanese and English. Seeking supporters, she initiated the New York Peace Film Festival in 2007.