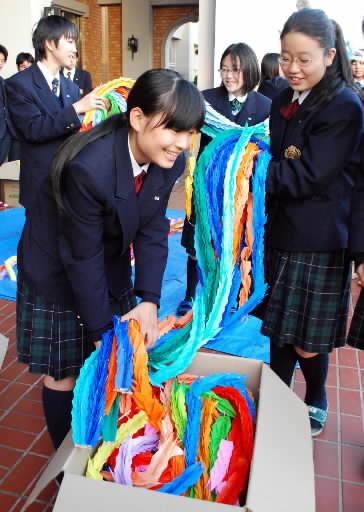 On November 25, junior high and senior high school students at Eishin Gakuen in the city of Fukuyama in Hiroshima Prefecture, packed 14,000 paper cranes they folded in boxes. The students are expressing support for a campaign launched by the "No Nuke Network: Students of Hiroshima Against Nuclear Weapons," which is seeking to encourage U.S. President Barack Obama to visit Hiroshima by sending paper cranes to the president. On November 26, the paper cranes from Fukuyama will be delivered to the students in Hiroshima

About 1,000 students at Eishin Gakuen, along with supportive adults, spent two weeks folding paper cranes from the middle of September. The paper cranes were folded one by one with a wish for peace in light of the large number of nuclear weapons on earth.

On November 25, 40 members of the student council carefully packed the paper cranes in boxes at the entrance hall of the school. Miri Fujiwara, 16, a second-year student at Eishin Senior High School and president of the student council, shared her feelings about the project, saying, "These are special paper cranes, filled with our hopes for peace. These cranes will surely convey our wishes to President Obama."