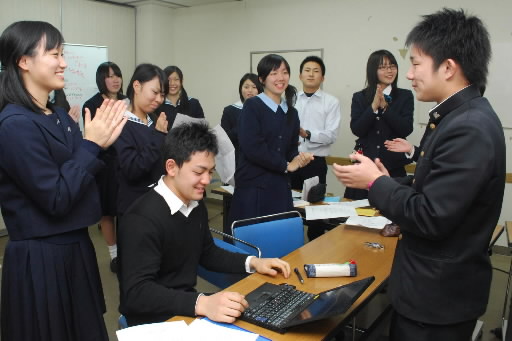 On November 29, students in Hiroshima and Nagasaki who have been working in pursuit of the abolition of nuclear weapons held a meeting in the city of Nagasaki and completed a peace declaration together. The declaration calls on people around the world to take action for peace. The students aim to present the peace declaration to world leaders, including Japanese Prime Minister Yukio Hatoyama.

The peace declaration is addressed "To the People of the World," and the students, as junior high and senior high school students born and raised in the A-bombed cities, state that "We hope to create peace, not through nuclear weapons and military force, but through dialogue and trust" in order not to repeat the tragic history of Hiroshima and Nagasaki. The students have expressed their hope that each individual will take action with the words "Please think about what you can do now."

Mitsuhiro Hayashida, 17, a second-year student at Nagasaki Kita High School, smiled and said, "After a lot of discussion, we have written the peace declaration, which we can confidently make public." Yuri Nakagaki, 17, a second-year student at Hiroshima Jogakuin Senior High School also commented, "We are afraid of people's indifference more than anything else. I hope the declaration will motivate people to think about nuclear weapons and peace."

The two groups in Hiroshima and Nagasaki intend to continue their cooperation in order to publicize the peace declaration. It is expected that the collaboration between the A-bombed cities will deepen, thanks to such activities by the younger generation.

On the morning of November 29, five high school students who are members of the "No Nuke Network: Students of Hiroshima Against Nuclear Weapons" arrived in the city of Nagasaki by train. On their arrival in the city, they visited Nagasaki Atomic Bomb Museum, Nagasaki Peace Park and the hypocenter, guided by a member of the "10,000 High School Students Signatures Campaign Executive Committee" in Nagasaki.

In the afternoon, they went to the Nagasaki Prefectural Education and Culture Hall, where they worked to complete the peace declaration. This was the third meeting in the process of writing the statement. The high school students from the two A-bombed cities engaged in serious discussion, including detailed consideration of the wording.

Tomoko Takamoto, 17, a second-year student at Hiroshima Jogakuin Senior High School, maintained that the beginning of the declaration should include the fact that people's loved ones could be killed and injured, in an instant, by nuclear weapons. "I wanted the peace declaration to conjure up the horror of nuclear weapons for readers with no knowledge about them."

"If we don't face the fact of Japan's aggression, the message from the A-bombed cities will not be received by the people of the world," argued Yuki Okada, 16, a first-year student at Shudo High School. Based on his experience at a peace education program in South Korea, he repeatedly called on the other members to craft a peace declaration that makes mention of Japan's wartime aggression.

On November 29, the students spent about two hours to complete the final draft of the peace declaration. Afterward, they jointly carried out a signature-collection drive in front of JR Nagasaki Station, appealing for the abolition of nuclear weapons. Yuji Kanemori, 17, a second-year student at Hiroshima Gakuin High School, showed his enthusiasm for further cooperation between the A-bombed cities, saying, "Many people took part in the signature drive, and I felt that Nagasaki citizens, like Hiroshima citizens, have a strong awareness of peace. Hiroshima and Nagasaki should continue to work together."

Peace Declaration by students in Hiroshima and Nagasaki: "To the People of the World"

Please imagine:
Because of a single atomic bomb,
your loved ones, by your side just moments ago,
are incinerated in an instant, dying in agony.
This is the horror of nuclear weapons.

We must face the current state of the world squarely.
We must learn about history rightly, from many angles.
We must listen to the voices of others and acknowledge their feelings.

And for the future,
we hope to create peace, not through weapons and military force, but through dialogue and trust.
We want to overcome religious, racial and language barriers to join hands with people around the world and take action.
Please think about what you can do now to help bring about peace in the world.

For humanity,
for the world,
for the earth,
and for the future.

What can you do now?
We are humble, but not powerless.
We, junior high and senior high school students in Hiroshima and Nagasaki, pledge to unite our aspiration for the elimination of nuclear weapons and work together in pursuit of the realization of peace in the world.