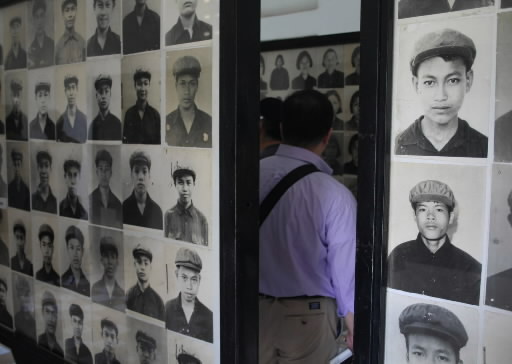 The final court proceeding for Kaing Guek Eav, who was chief of a Khmer Rouge prison that held political prisoners and forced 15,000 people to their deaths, was concluded on November 27. Why did he kill his compatriots? The wounds of the civil war are still raw, but many have gained encouragement from the tribunal where senior Khmer Rouge leaders are being tried. Toward this end, the Japanese government has been providing support, both moral and material, to the trials in order to help facilitate the reconciliation of the Cambodian people.

Cruel history has begun to be told

"I was beaten with a stick, and my toe nails were pulled out." "I wasn't given one drop of water, so I had to drink my own urine." The families of the victims reportedly wept as they listened to the testimonies of those who managed to survive their ordeals. The family members were no doubt thinking of their missing relatives.

The testimonies and rebuttals in each session of the trial were broadcast live on TV, but that apparently did not satisfy the public. Over the 72 days of court proceedings that began in March, a total of 24,000 people crowded in the courtroom.

"The trials themselves are part of the process of healing. It is vital that this nation overcome the past and move forward into the future," says Yuko Maeda, 45, a former UN staff member.

The pro-Chinese communist Pol Pot seized control of the capital Phnom Penh in 1975 after fighting off a pro-American faction. His Khmer Rouge regime purged the former ruling class as well as intellectuals on the grounds that they were anti-revolutionary, and drove urban residents into rural areas to engage in forced labor. The regime held power for about four years and roughly 2 million people are believed to have been murdered or died of hunger. The death rate is equivalent to one-fourth of the population at that time.

The grandfather of one man was a high school principal and he was killed by the Khmer Rouge. The man, 36, who lives near the historic ruins of Angkor Wat, says that his grandmother is troubled by nightmares. "Slaughtering your own countrymen is even more inhuman than the Nazis," he adds, but he has buried his anger deep down inside for among the former Khmer Rouge soldiers are his own relatives.

There was a confusion of perpetrators and victims during the conflict. Even today, it is difficult to have frank conversations about that time with family members and relatives. Ill will is still felt even long after the war has ended.

But the Extraordinary Chambers in the Courts of Cambodia for the Prosecution of Crimes Committed during the Period of Democratic Kampuchea might enable a breakthrough to be made. More than 2,000 people voluntarily stepped forward to help bring survivors to the trials as witnesses. From this fall the Khmer Rouge period will be taken up in university and high school history classes.

"I am to blame for everything." "I beg you to brand me a perpetrator." At each trial the former prison chief pled for forgiveness with his palms pressed together. At the sight of Mr. Eav confessing his crimes, many observers were in tears. "Finally, the time has come where we can talk about our history" seemed to be the sentiment.

The Toul Sleng Genocide Museum, the former site of the Tuol Sleng Prison where political prisoners were held, is now a memorial site for the public, including international visitors.

The buildings used to be a high school. Partitioned by brick walls, the classrooms were converted to solitary cells or torture chambers. One corner is lined with portraits of the victims. A young boy smiles shyly, while the eyes of adult inmates look dazed as if anticipating their doom.

Was it mass insanity? Or did an ideology run wild? Why could no one put a stop to such cruelty? As a lesson for humanity, the terrible void created in Cambodia's contemporary history must be filled. The trials are of profound significance as they shed light on the truth known by perpetrators and victims that have been kept all to themselves.

Eighty percent of the expense for the trials has been borne by the UN, with contributions from member nations constituting the assistance. These contributions have amounted to $72.7 million (roughly 6.543 billion yen) over three and a half years up to June. Japan has voluntarily contributed 54% of the amount.

Cambodia is the first country that Japan dispatched its Self Defense Forces to in 1992 within the UN framework. Japan sees the tribunal as an extension of the UN peacekeeping operations, and regards it as "the final stage of the peace process."

Extraordinary Chambers in the Courts of Cambodia for the Prosecution of Crimes Committed during the Period of Democratic Kampuchea
Crimes against humanity and war crimes committed under the Khmer Rouge regime (1975-1979) are being tried by this court. The court was established in February 2006 with support from the UN. To date, five former senior leaders have been detained for trial. One of the Supreme Court Chamber judges is Japanese.