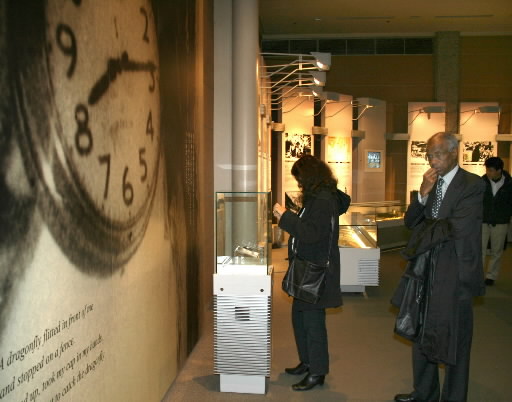 Ahmedou Ould-Abdallah of Mauritania, 69, UN Special Representative of the Secretary-General for Somalia, visited Peace Memorial Museum and other facilities in Hiroshima on November 30. Mr. Ould-Abdallah is visiting Japan through the invitation of the Foreign Ministry of Japan, and the visit to Hiroshima was arranged at his own initiative. He sought to learn about Hiroshima in order to use the knowledge for the reconstruction of Somalia where a civil war has continued for nearly 20 years.

Inside the museum, Mr. Ould-Abdallah spent about one and a half hours reading the explanatory panels closely, covering such issues as the history behind the dropping of the atomic bombs. He also looked keenly at exhibits on the post-war reconstruction of the city, including those about aid from overseas and the development of city roads.

After touring the museum, Mr. Ould-Abdallah commented, "I was impressed with the fact that Japan, which was severely damaged during the war, was able to rebuild and become one of the most powerful countries in the world. When I go back to Somalia, I would like to speak of the necessity of peace and economic growth for a nation to be strong."