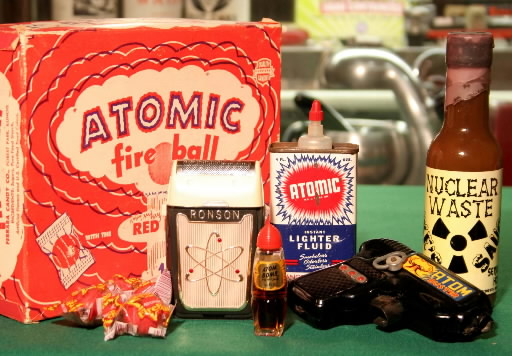 An "atomicalia" exhibition, intended as a critical look at how pervasive nuclear images have become to daily life, particularly in the United States, is being held at Space Pica in downtown Hiroshima. Along with the atomicalia exhibition, which features a display of household appliances, toys and sweets with imagery of nuclear weapons and atomic energy, a contemporary art exhibition and photo exhibition are sharing the venue. Volunteers in Hiroshima who have organized the "Hiroshima Peace Film Festival" since last year have arranged the exhibition in conjunction with this year's festival.

"Atomicalia" is a generic term for items that bear an image evoking atomic energy. The roughly 100 items on display at the exhibition are part of the collection of Mick Broderick, the author of Hibakusha Cinema and an associate professor of media studies at Murdoch University in Australia. Most of the items on display were produced in the United States. Mr. Broderick has been collecting such items through the Internet for over 10 years.

"Atomic fireball," an American candy with a very spicy flavor, has been sold since 1954. Other commodities carrying "atomic" labels include medications, perfumes and deodorants, in which the word "atomic" is used in an offhand way to mean "a dramatic effect." There are also many household appliances and goods decorated with the design of an atomic nucleus.

Mr. Broderick explained that the changing times can be sensed from these objects since they reveal people's perceptions of atomic energy. Early on, atomic energy appeared as a symbol of strength and novelty, but then it turned into a target of scorn, considered something suspicious and dangerous. These days, atomicalia objects often reflect nostalgia for the Cold War era.

More than a few objects at the exhibition may offend or distress visitors. However, the exhibition highlights the reality of our consumer-oriented society and the gap in perception of nuclear images between Japan and the United States. From these truths we should not avert our eyes.

The atomicalia exhibition runs through December 10 at Space Pica. Exhibition hours are from 3:00 to 8:00 p.m.