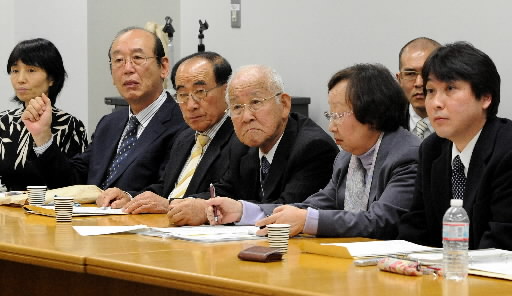 The revised Atomic Bomb Survivors Relief Law marks its first anniversary in December. The law has enabled aging A-bomb survivors (hibakusha) overseas to file the application for the Atomic Bomb Survivor's Certificate from their country of residence. In spite of a supplementary provision of the law which states that hibakusha residing abroad must be treated fairly in comparison with their counterparts in Japan, survivors overseas have not been permitted to apply for A-bomb disease certification from where they live nor to receive a medical allowance. The addendum was attached to the law because of a demand made by the Democratic Party of Japan, then the opposition party, when it was enacted last June. Now the same party has become the ruling party. The party's "political leadership" is now being tested in regard to a comprehensive review of the relief measures for A-bomb survivors and the establishment of a new system for providing relief.

Kim Yong Gil, 69, president of the South Korean Atomic Bomb Sufferers Association, comprised of about 2,660 members whose average age is 75, said, "It has been 32 years since our association was established. Since then, we have made many requests, but a number of issues have yet to be resolved. Today I came here with anticipation for the new administration." Mr. Kim, who experienced the atomic bombing of Hiroshima while with his mother and younger brother, then submitted the requests for Akira Nagatsuma, the Minister of Health, Labour and Welfare (MHLW), to the Health Service Bureau.

Takashi Morita, 85, chairman of the Peace Association of Brazilian A-bomb Survivors, encountered the bombing while engaged in military service. He spoke on behalf of nearly 120 members, saying, "Some measures should be taken so that A-bomb survivors in Brazil can receive medical treatment there." Even by air, the burden of traveling a day and a half from Brazil to Japan is very heavy.

Their requests, including those of the A-bomb Survivors in North America, were submitted at a meeting of a bipartisan group of Diet members on November 13 in Tokyo. This group of lawmakers is seeking to make the Atomic Bomb Survivors Law applicable to A-bomb survivors abroad. Another reason these representatives of hibakusha groups attended the meeting was to hear the progress in reviewing the addendum the legislative body had called upon the Japanese government to enact before the first anniversary of the revised Atomic Bomb Survivors Relief Law.

As for measures enabling Japanese embassies and consulates to accept applications for A-bomb disease recognition from overseas, the MHLW explained that they are working on the details with Japanese embassies and consulates. A-bomb diseases are radiation-induced illnesses such as cancer. In Japan, the health care costs of such illnesses suffered by A-bomb survivors are paid for by the government. As to the costs of those living abroad, the MHLW has recently indicated that they will cover this expense by raising the health care subsidies (with a cap for FY 2009 of 165,000 yen per person for hospitalization) that were initiated five years ago.

After the meeting, Toshihiko Suzuki, the chief of the General Affairs Division of the Health Service Bureau within the MHLW, avoided mentioning a specific timeline for allowing applications for A-bomb disease certification from overseas. "We also have to deal with the issue of communication between our side and the doctors overseas, who complete the medical forms," he said. "We are moving in the direction of permitting the applications, but we can't say exactly when." Mr. Suzuki also spoke about removing the cap on health care subsidies included in the submitted requests. "It would be difficult to remove the cap," he said, stressing the differences in the medical care systems between Japan and other countries.

A-bomb survivors overseas have been left out of the scheme even after the Atomic Bomb Medical Relief Law took effect. However, the plea of a Korean A-bomb survivor, who entered Japan illegally to call for medical treatment, and the support of citizens, who spoke out over Japanese colonial rule of Korea, led to the "Son Jin Doo" lawsuit. In 1978, the Supreme Court handed down the following ruling: "Health disorders caused by the atomic bombings are of a specific and serious nature and these disorders were brought about by the war, which Japan had pursued…The Atomic Bomb Medical Relief Law is based on the idea of national reparations…Even illegal aliens, as long as they are A-bomb survivors, should not be excluded from the application of the law."

In spite of the ruling, A-bomb survivors overseas continued to be excluded from the application of the law. This was due to the issuance of Directive No. 402 in 1974 by the former Health and Welfare Ministry. Directive No. 402 stipulated that "The certificate will become invalid as soon as the recipient leaves Japan." Even if hibakusha living abroad, despite poor health, traveled all the way to Japan to obtain the Atomic Bomb Survivor's Certificate, once they left Japan they could no longer receive the Health Management Allowance.

"Hibakusha are hibakusha , no matter where they reside," said Kwak Kifun, 85, who was exposed to the atomic bombing after being drafted into the Japanese military and was involved in establishing the South Korean Atomic Bomb Sufferers Association. Mr. Kim filed a lawsuit in 1998, arguing the illegality of cutting off the allowance for health care upon leaving Japan at the conclusion of a hospital stay for treatment. Since the lawsuit, both hibakusha overseas and their supporters have managed to rectify the arbitrary law upheld by "bureaucrats" through court decisions.

Every time it lost a case, the ministry revised its enforcement. It began to allow applications for the health care allowance and remittance from countries or areas where A-bomb survivors reside. The Democratic Party of Japan, the Social Democratic Party, and the Communist Party, then in the opposition, demanded that the law be applied across the board and this effort led to the enactment of the revised Atomic Bomb Survivors Relief Law.

Keisaburo Toyonaga, 73, director of the Hiroshima branch of the Association of Citizens for the Support of South Korean Atomic Bomb Victims, who attended the meeting, called for a shift from the stopgap measures "promoted by bureaucrats." He said, "We called for the Japanese government to act promptly in solving pending issues such as the universal application of the Relief Law and reparations regarding Directive No. 402, which the Supreme Court judged illegal."

In addition, there are reportedly at least 161 A-bomb survivors in Korea who have not obtained the Atomic Bomb Survivor's Certificate. Even if the Korean Red Cross and the South Korean Atomic Bomb Sufferers Association approve their status as A-bomb survivors, it is difficult to find witnesses, one of the conditions in applying for the Atomic Bomb Survivor's Certificate, because some are now suffering from dementia while others were too young at the time to remember the details of their experience. The association is therefore appealing for a political solution to the problem.

While hibakusha overseas suffered the same horrific experiences as their Japanese counterparts back in August 1945, the survivors abroad still have difficulty receiving adequate relief from the Japanese government. The gap occurs because A-bomb survivors are not equally defined as war victims. It is also because the Relief Law has not been recognized as "national reparations," where the Japanese government acknowledges its war responsibility.

The Japan Confederation for A-and H-Bomb Sufferers Organizations, which filed a class action lawsuit over the application process for A-bomb disease certification from abroad, and exchanged confirmation documents with the government on August 6, 2009 in regard to closing the case, is striving to have the Relief Law revised. Terumi Tanaka, 78, secretary general of the group, said, "We want to achieve national reparations which focus on condolence money for the A-bomb survivors. This should pave the way for a scheme to funnel money from national coffers to cover all the medical expenses for hibakusha overseas," indicating that they will increase their pressure on the current administration to take actions toward this goal.

The collection of policies compiled by the Democratic Party of Japan before the recent general election includes "creating a new scheme to allow A-bomb disease certification" and "extending support of health care for A-bomb survivors overseas." They view relief from the perspective of social security.

The war Japan caused led to the atomic bombings of Hiroshima and Nagasaki, killing more than 200,000 people by the end of 1945. The A-bomb survivors who endured the delayed effects of radiation as well as discrimination from society, now number less than 240,000, including about 4,300 hibakusha overseas. There should be no more such victims of war or nuclear weapons. And the Atomic Bomb Survivors Relief Law should show to the world Japan's responsibility to the past and its commitment to eliminating war and nuclear weapons for the future.