Nuclear weapons can be eliminated: International symposium held in Hiroshima 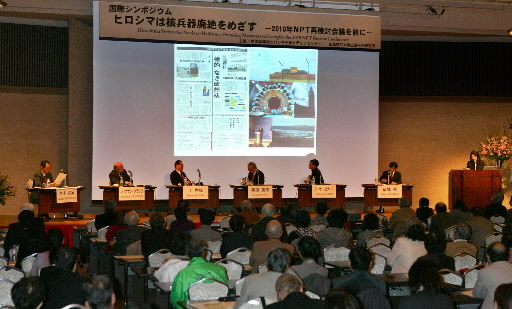 An international symposium entitled "Hiroshima Strives for Nuclear Abolition: Pursuing measures to energize the 2010 NPT Review Conference" was jointly organized by the Hiroshima Peace Institute of Hiroshima City University and the Hiroshima Peace Media Center of the Chugoku Shimbun at the International Conference Center Hiroshima on December 5. In the run-up to the 2010 NPT Review Conference to be held next May, experts from the United States, Korea and Japan analyzed the current status of nuclear weapons in the world and exchanged views on various issues including the role of Japan in advancing the abolition of nuclear weapons. About 250 people were in attendance.

Jonathan Granoff, president of the Global Security Institute, a U.S.-based NGO, suggested in his keynote speech that Japan should take a leadership role in holding a preparatory meeting toward the negotiation and conclusion of a Nuclear Weapons Convention. Discussing North Korea and the nuclear issue, Jeong Se-Hyun, the other keynote speaker and a former minister of the Unification Ministry of South Korea, said that the normalization of diplomatic relations and the conclusion of a peace accord should be prioritized for an early resolution to the problem.

Following the keynote speeches, there was a panel discussion led by Kazumi Mizumoto, an associate professor at the Hiroshima Peace Institute. Yoshiki Mine, a former permanent representative and ambassador of Japan to the Conference on Disarmament, pointed out that the Negative Security Assurances, stipulating that nuclear weapons should not be used against non-nuclear-weapon states, must be achieved first. Arthur Binard, a poet who has been expressing opposition to nuclear weapons through use of the incident involving the fishing boat Daigo Fukuryu Maru (Lucky Dragon No. 5) and other resources, stressed that nuclear weapons, in being created by human beings, can also be eliminated through the effort of human beings.

Akira Tashiro, executive director of the Hiroshima Peace Media Center, presented the Center's efforts to disseminate information not only through the Chugoku Shimbun but through its website as well. He also stressed the importance of the roles of the A-bombed nation and its citizens in achieving the elimination of nuclear weapons.

Members of the "No Nuke Network: Students of Hiroshima Against Nuclear Weapons," a group of junior high and senior high school students, also shared their campaign activities aimed at inviting U.S. President Barack Obama to Hiroshima.