Interview with Robert Grey, former U.S. Representative to the Conference on Disarmament, on U.S. nuclear diplomacy 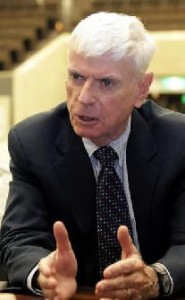 The Strategic Arms Reduction Treaty (START 1), which was signed by the United States and the former Soviet Union in 1991, has expired. The Chugoku Shimbun interviewed Robert Grey, 73, the former U.S. Representative to the Conference on Disarmament and an expert on U.S. nuclear disarmament policy, on the prospects and challenges for U.S. nuclear diplomacy, during his visit to Hiroshima.

Why do you think a final agreement on a pact succeeding START 1 was not reached by December 5, when the treaty was set to expire?
The United States and Russia have been engaged in serious negotiations for the last five months. Partly due to the change of U.S. presidents, they have been preoccupied with "negotiations for negotiations" until recently. The environment hadn't been conducive to reaching an agreement.

The fact that U.S.-Russia relations cooled during the former Bush administration had a significant impact as well. Russia was put on the alert by the eastward expansion of the North Atlantic Treaty Organization (NATO) pushed by the Bush administration. Last year, the war between Russia and Georgia widened the divide between NATO and Russia.

From another perspective, though, it can be said that the two nations have done a good job in such a short period of time.

However, the United States and Russia both recognize the importance of the succeeding treaty. Although there may be some delay, the new treaty will surely be signed. And until it goes into force, the current system will be sustained, in principle. I'm not particularly concerned over the lag time between the two.

What do you think of the interim agreement that requires the United States and Russia to reduce their nuclear warheads to between 1,500 and 1,675 each?
The scale of such reductions is modest, and I hope that negotiations seeking further reductions will be conducted.

Robert Grey
Mr. Grey served as the U.S. Representative to the Conference on Disarmament from 1998 to 2001. He also worked as a political advisor to the Supreme Allied Commander at NATO and Director of the State Department's Office of Advanced Technology.