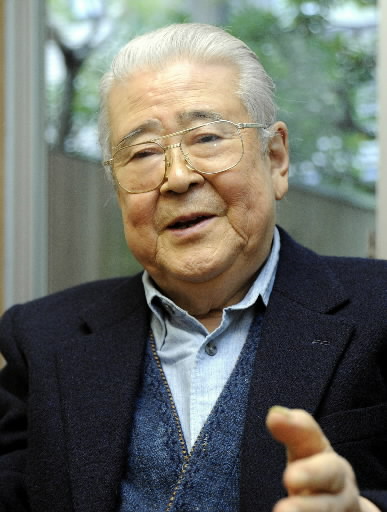 Ikuo Hirayama, a prominent Japanese painter and recipient of the Order of Cultural Merit, died of a stroke at St Luke's International Hospital in Tokyo at 12:38 p.m. on December 2. He was 79 years old. Mr. Hirayama was a native of Setoda Town in the city of Onomichi, Hiroshima Prefecture. He had been residing in the city of Kamakura in Kanagawa Prefecture with his wife, Michiko. A private funeral service will be held on December 4 at a Tokyo church with close relations. The Japan Art Institute will hold an institute-sponsored service at a later date.

Mr. Hirayama, chairman of the Japan Art Institute and a former president of Tokyo University of the Arts, was a leading figure in the Japanese art world and known for his style of painting that conveyed the history of Buddhism, the cultural exchange between East and West, and the Silk Road. Mr. Hirayama also devoted himself to preserving the cultural heritage of the world as a goodwill ambassador of the UN Educational, Scientific and Cultural Organization (UNESCO).

As a student at the former Shudo Junior High School in 1945, Mr. Hirayama experienced the atomic bombing of Hiroshima when he was mobilized in the city for the war effort. He narrowly escaped death. Advised by his great-uncle Nanzan Shimizu, a metal engraver, he went to the Tokyo School of Art (now, Tokyo University of the Arts), studied Japanese painting under Seison Maeda, and graduated from the university in 1952. The following year he was admitted to the Japan Art Academy Exhibition for the first time, with his work "Ieji" ("The Way Home"), and his works were then regularly accepted for this exhibition.

Suffering from the aftereffects of the atomic bombing, in 1959 he painted "Bukkyo denrai" ("The Transmission of Buddhism") on the theme of Xuanzang, a Buddhist monk. As if linking the hardships suffered by Xuanzang with his own life, Mr. Hirayama continued to gather information on the route Buddhism followed and produced a series of Buddhism-themed works.

In 1966 he visited Turkey as a member of a team dispatched by Tokyo University of the Arts to explore ruins there and was inspired to begin creating works on the theme of the Silk Road.

Mr. Hirayama did his utmost to preserve and restore Buddhist culture and cultural assets, copying murals in Horyuji Temple's main hall and those at the Takamatsuzuka Tumulus [an ancient burial mound with fresco wall paintings]. He also turned his attention to cultural assets overseas and contributed his efforts to cultural diplomacy, engaging in the preservation work for the murals in Dunhuang, China and those in former Gogruyeo, North Korea. He proposed the "Red Cross activities for cultural assets" and appealed for the preservation of endangered cultural assets under unstable conditions, such as the Buddhist ruins at Bamiyan in Afghanistan.

He produced paintings on a broad range of subject matter, including "Gekka Itsukushima" ("The Moonlight and Istukushima Shrine") and "Heisei rakuchu rakugai zu” (Kyoto City and Suburbs in the Heisei Period") as well as "Hiroshima shohenzu" ("The Holocaust of Hiroshima"), in which he depicted the atomic bombing. He served as chairperson of the Japan Art Institute from 1996, and received the Order of Cultural Merit in 1998. He was the president of Tokyo University of the Arts for two tenures, totaling ten years, with the first period starting from 1989 and the second from 2001. He was also an honorary citizen of Hiroshima City and honorary resident of Hiroshima Prefecture.

After a suspected stroke, Mr. Hirayama was hospitalized for examination at the end of October. He reportedly took up a brush early in his stay at the hospital, but his condition deteriorated several days ago.

The sad news about Mr. Hirayama, "an honorary resident of Hiroshima Prefecture," brings great sorrow in the fact we must bid farewell to an exceptional artist who has been a source of pride for our prefecture. Mr. Hirayama assumed the post of honorary director of Hiroshima Prefectural Art Museum while engaged in activities to preserve cultural heritage in various parts of the world. Including the opening of the Hirayama Ikuo Museum of Art, Mr. Hirayama dedicated himself to the development of culture and arts in Hiroshima. I am confident that his lifelong passion for the arts and the affection he felt for his hometown will be passed on to younger generations for many years to come.

Celebrated painter Ikuo Hirayama died on December 2 at the age of 79. He once said, "If I hadn't experienced the atomic bombing, I would not have become the artist I am today." Besides creating works of art, Mr. Hirayama undertook another mission. His voice was among the strongest in appealing for the A-bomb Dome in Hiroshima to be designated a UNESCO World Heritage site. "Historical monuments of such objectivity should be passed down to posterity," he said.

On August 6, 1945, when Mr. Hirayama was a third-year student at the former Shudo Junior High School, he was in a lumber shed used by the Japanese military in present-day Minami Ward in Hiroshima. By being in the shed at the time of the blast, he managed to survive. When the bomb exploded, the dim interior of the shed, made of wooden planks, was lit up by the flash.

About half a century after the bombing, in 1994, he was serving as president of Tokyo University of the Arts when he assumed the post of vice-president of the A-bomb Dome World Heritage Site Promotion Committee. He stressed, "The A-bomb Dome is of great significance in regard to matters of war and peace."

Mr. Hirayama suffered from an extraordinarily low white blood cell count, an aftereffect of the bomb's radiation. Instead of expressing recrimination, though, he turned his works into prayers for peace. The preservation of the A-bomb Dome was an extension of this philosophy.

Takashi Hiraoka, 81, the former mayor of Hiroshima, who also served as president of the committee, said, "Mr. Hirayama advocated peace calmly and gracefully through his art. He had a deep love for his native Hiroshima," and recollected how enthusiastic Mr. Hirayama was in his efforts to appeal to related organizations for the A-bomb Dome's registration.

Two years later, in 1996, the A-bomb Dome was designated a World Heritage site. Partly because of his contribution in this endeavor, he was made an honorary citizen of Hiroshima in 1998. Hiroshima Mayor Tadatoshi Akiba commented on his death, "The awareness of peace underlay all his activities."

At the news of Ikuo Hirayama's death on December 2, people in the painter's hometown of Setoda, Onomichi, and people related to Shudo Junior & High School in central Hiroshima reacted with grief.

The collection of the Hirayama Ikuo Museum of Art, located in Setoda, includes Mr. Hirayama's sketches from his childhood and large-scale paintings. Ryoichi Kameda, 82, chairman of the museum, expressed sorrow, recalling, "I watched him closely as he drew sketches of the Onomichi-Ohashi Bridge. He was a gentle and quiet person but was very strict with himself in terms of creating art. I talked with him just recently about an art project scheduled for next spring."

Onomichi Mayor Yuko Hiratani, 56, commented, "I can still picture Mr. Hirayama teaching children that they should draw with their heart. I sincerely pray for the repose of his soul."

At the main entrance of Shudo High School is a porcelain panel mural, three meters long and 4.5 meters wide, created by Mr. Hirayama with the school song as its motif. Toshinori Tahara, principal of the school, said, lowering his gaze, "We have lost a great graduate of this school, who is beloved by everyone. I am very much saddened at the news."

Yoshiro Ishimoto, 79, one of Mr. Hirayama's classmates from the former Shudo Junior High School during the war, was exposed to the atomic bomb with Mr. Hirayama at the same site while mobilized for the war effort. "He loved to draw and would draw in secret during class," said Mr. Ishimoto. "He was always smiling and had a good sense of humor."