HICARE delegation leaves for U.S. to hold workshops in support of A-bomb survivors 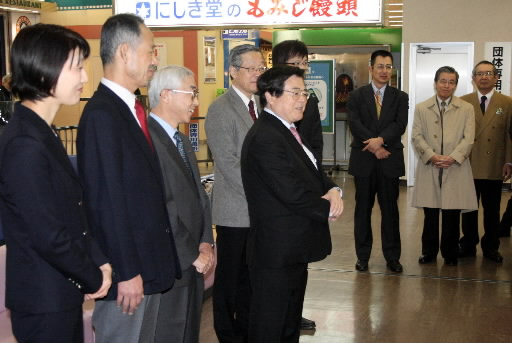 A delegation from the Hiroshima International Council for Health Care of the Radiation-exposed (HICARE), an organization formed by Hiroshima Prefecture, the City of Hiroshima, and other entities, left for the United States on December 2. They will offer information to U.S. medical personnel on treating A-bomb survivors in order to support the survivors residing there.

The delegation consists of four doctors with expertise on the aftereffects of the atomic bombing and two HICARE staff members. During the departure ceremony held at JR Hiroshima Station, Shizuteru Usui, the leader of the group and president of the Hiroshima Prefectural Medical Association, said, "We are determined to do the best we can to support A-bomb survivors living overseas."

They will hold workshops at hospitals and other facilities in Seattle, San Francisco and Torrance, California where a relatively large number of survivors are living, and explain the aftereffects of the atomic bombing and the latest medical treatment for survivors to about 200 doctors and others. The delegation will also gather information about the problems and needs of local people and return to Japan on December 9.

This is the second time HICARE will hold workshops overseas, following those held in Brazil in 2007.