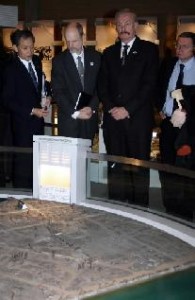 On December 3, Přemysl Sobotka, 65, President of the Senate of the Parliament of the Czech Republic, visited Hiroshima Peace Memorial Museum. "This visit has been an unforgettable experience. Politicians from around the globe should pay a visit to Hiroshima," Mr. Sobotka said.

Koichiro Maeda, director of the museum, served as Mr. Sobotka's guide and provided explanation on the damage wrought by the atomic bombing. Referring to the speech made by U.S. President Barack Obama in Prague in April, Mr. Sobotaka stressed, "The threat of nuclear weapons is a perilous warning for the whole world. All of us, together, must strive to abolish nuclear weapons."

Mr. Sobotka arrived in Japan on November 30 at the invitation of the House of Councilors of Japan and the visit to Hiroshima was realized due to his strong desire to see the city. Following the tour of the museum, the delegation led by Mr. Sobotka offered flowers at the Cenotaph for the A-bomb Victims and visited the Atomic Bomb Dome (the former Hiroshima Prefectural Industrial Promotion Hall) that was designed by Czech architect Jan Letzel.