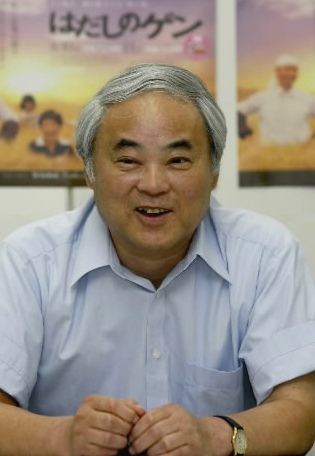 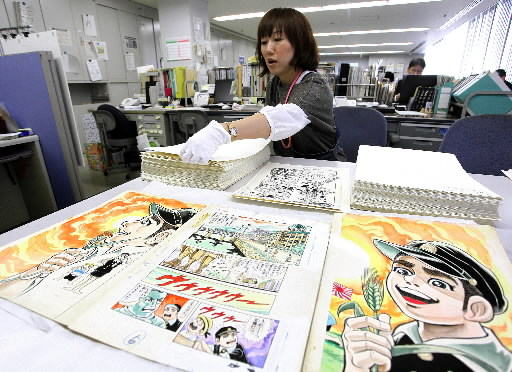 On December 8, it was learned that Keiji Nakazawa, 70, the comic book artist of the "Barefoot Gen" manga series, which tells the story of a boy who struggles against hardship in Hiroshima after the atomic bombing, will donate all his original pictures and A-bomb-related materials to Hiroshima Peace Memorial Museum. Mr. Nakazawa first began issuing his manga stories in 1963 and about 60 percent of his 59 works (one is unpublished) are based on the theme of the atomic bombing. The museum will make use of the items in an exhibition.

Mr. Nakazawa's donations will include: the original pictures of his 58 published works, including those of the "Barefoot Gen" series, "Kuroi ame ni utarete," ("Pelted by Black Rain"), and "Okonomi Hacchan" ("Hacchan in a Japanese Pizza Restaurant"); unpublished original pictures of "Barefoot Gen, Part 2: Life in Tokyo," an unfinished story in which Mr. Nakazawa planned to feature a grown-up Gen; notebooks in which Mr. Nakazawa wrote stories; magazines, such as "Weekly Shonen Jump," that carried his works; and A-bomb-related materials used in creating his works.

However, Mr. Nakazawa does not have the original pictures of his debut piece "Spaku 1" ("Spark 1") and is unsure of their whereabouts.

For the opening of the east wing of Hiroshima Peace Memorial Museum in May 1994, Mr. Nakazawa entrusted a total of 2,735 original pictures of "Gen" to the museum for an exhibition at that time. The ownership of this set of pictures of "Gen," along with that of the other original pictures, will now be transferred to the City of Hiroshima. At the same time, Mr. Nakazawa will continue to hold the copyrights of these works. The city and Mr. Nakazawa will exchange documents on this matter in January. The donations from Mr. Nakazawa, excluding the "Gen" pictures, fill about 30 cardboard boxes. These materials have already been sent from Mr. Nakazawa's home in the city of Tokorozawa in Saitama Prefecture.

Mr. Nakazawa announced in September that he would retire from his work as a manga artist due to deteriorating eyesight, caused by cataracts, which have left him unable to continue drawing fine lines. He decided to donate his original artwork and A-bomb-related materials, as "I want people to continue to convey the cruelty of the atomic bombing and the preciousness of peace that Gen has been calling for." Koichiro Maeda, director of the museum, said, "Gen is well-known outside Japan, too, and these original pictures are remarkable materials for the museum. We will preserve them as a whole."

"Barefoot Gen"
The "Barefoot Gen" manga series began as a serial in the magazine "Weekly Shonen Jump" in 1973. Gen, who fights against adversity caused by the atomic bombing and lives his life with a positive attitude, gained popularity, which led to the great success of the series with a total of 10 million copies sold in book form. The series has been translated into 17 languages. Mr. Nakazawa had planned a new series "Barefoot Gen, Part 2: Life in Tokyo," for which he was preparing a plot involving Gen heading to France to study painting. But he revealed his intention to give up creating the new series, when he announced his retirement this past September.