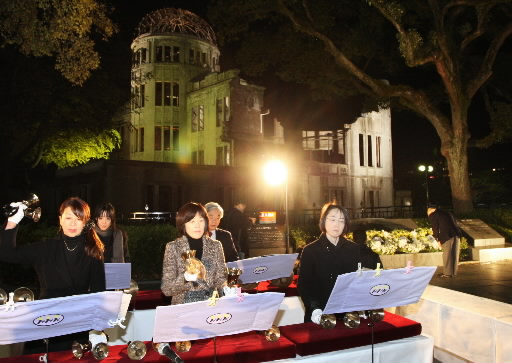 A gathering to commemorate the 13th anniversary of the registration of the Atomic Bomb Dome on the list of UNESCO's World Heritage sites was organized in front of the dome on the evening of December 7.

The Hiroshima Peace Liaison Conference for Nuclear Abolition, consisting of twelve organizations including the Hiroshima Local of Japanese Trade Union Confederation and the Hiroshima Prefectural Confederation of A-bomb Sufferers Organizations, sponsored the event. About 100 people took part in the gathering and pledged to continue their activities for the cause of peace.

Representatives from the 12 organizations, including Yukio Itami, chairman of the trade union confederation, and Sunao Tsuboi, chairman of the A-bomb Sufferers Confederation, dedicated flower wreathes and water in front of the A-bomb Dome and the participants joined together for a silent prayer. A citizens group played a musical piece with handbells called "Life in the World = The Spirit of Hiroshima."

Mr. Tsuboi concluded the event, remarking, "The day the A-bomb Dome was registered as a World Heritage site is as important as August 6 when the Peace Memorial Ceremony is held. We would like to continue our efforts for peace so that the term "A-bomb Dome" will remind everyone of peace."

The A-bomb Dome was added to the list of World Heritage sites on December 7, 1996. The liaison conference has been holding this commemorative gathering since 2001, which marked the 5th anniversary of the registration.