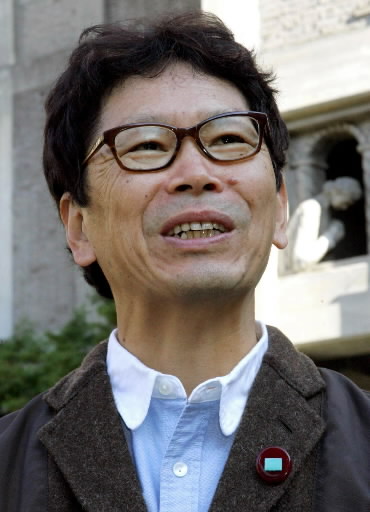 This past August, Kosetsu Minami, a well-known Japanese folk singer, brought an end to a series of annual peace prayer concerts he held for the last ten years at the Memorial Cathedral for World Peace in downtown Hiroshima. He revisited the cathedral this month to deliver a donation from the proceeds of this year's concert. What motivated the singer to return to Hiroshima each year for the past ten years?

"The image of Ichiro Moritaki had always been in my mind," explained Mr. Minami, revealing the inspiration for his concerts.

Mr. Moritaki, who passed away in 1994, was a sort of icon of the A-bombed city of Hiroshima. He held repeated sit-ins in front of the Cenotaph for the A-bomb Victims to protest nuclear tests whenever they were conducted. Mr. Minami clearly recalls Mr. Moritaki "protesting in silence, a sash across his chest."

The attitude embodied by Mr. Moritaki taught Mr. Minami that "If you don't raise your voice, the path to peace will not open." Mr. Moritaki's words--"We must create a world of love, instead of a world of power"--were also inspiring to Mr. Minami. Thus, Mr. Minami came to realize that he could express something at the cathedral which is a symbol of the city's post-war reconstruction.

At each concert, the cathedral, solemnly lit with candles, resonated with the folk singer's affecting voice and guitar playing. The audience was deeply moved and a sense of unity, filled with prayer, became palpable. Every year Mr. Minami's concerts gathered greater attention through word of mouth and it became increasingly difficult to obtain tickets in recent years. "At the beginning, we had no idea how many people would come to the concert," he said. "I see its popularity as an indication that the significance of the concert was understood and accepted by the local people."

"It's enough for me if the audience was moved to feel opposition toward war and hope for the elimination of nuclear weapons," Mr. Minami said. He added with emphasis, "That sort of sentiment in each individual will surely make them more empathetic toward others and will stir them to take action in the way they can."

Prior to holding the concerts at the cathedral, Mr. Minami also staged Hiroshima Peace concerts with other musicians for ten years starting in 1986. The donations from these concerts helped support the construction of Kurakake Nozomi-en, a nursing home for atomic bomb survivors. He visits the home every year and sees many familiar faces there.

Though he has wrapped up his annual concerts at the cathedral, Mr. Minami is determined to continue his involvement with Hiroshima in one way or another until the day he dies. "I will hold my guitar and sing until the abolition of nuclear weapons is achieved," he said.