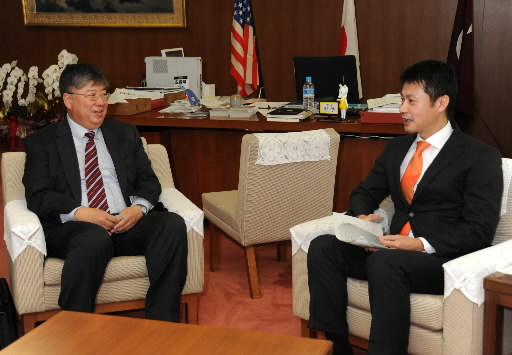 Hiroshima Governor Hidehiko Yuzaki met with Edward Dong, consul general of the U.S. Consulate General in Osaka-Kobe, at Hiroshima Prefectural Government on December 14. Mr. Yuzaki requested of Mr. Dong that the United States strengthen its efforts for the success of the Nuclear Non-proliferation Treaty (NPT) Review Conference slated for next May.

Mr. Dong's visit to the Prefectural Government took place before he attended an event organized by the Japan-America Society of Hiroshima. Governor Yuzaki stressed, "I would like to ask you to tell your ambassador and Washington to strive to make the NPT Review Conference a success and proactively work for the elimination of nuclear weapons. Mr. Dong pointed out that U.S. President Barack Obama stated that he would "strive for peace" in his speech at the Nobel Peace Prize Award Ceremony. "A journey of a thousand miles begins with a single step," added Mr. Dong.