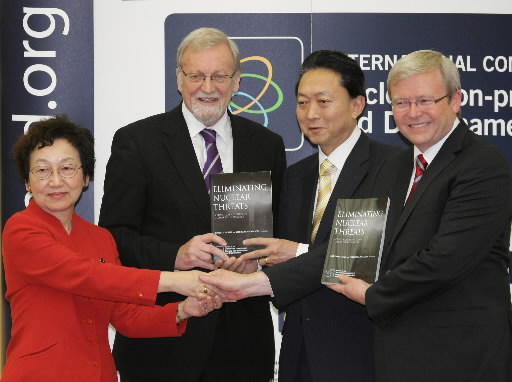 On December 15, the International Commission on Nuclear Non-proliferation and Disarmament (ICNND), a joint initiative by the Japanese and Australian governments, submitted its report to the leaders of the two nations. The report recommends an agenda of actions in pursuit of nuclear abolition and urges the United States to limit the role of nuclear weapons to deterring a nuclear attack.

The 332-page report, drafted in English, is titled "Eliminating Nuclear Threats: A Practical Agenda for Policymakers." It includes 76 clauses of recommendations and provides a road map toward nuclear abolition with a three-step approach, presenting an agenda of short, medium, and longer-term actions.

With regard to short-term objectives by 2012, the report states that "the sole purpose of nuclear weapons" should be limited to deterring the use of such weapons, and notes the importance of a "sole purpose" statement being included in the U.S. Nuclear Posture Review (NPR), which the U.S. government is now formulating as a basic guideline for its nuclear strategy.

For medium-term objectives by 2025, the report includes declarations of the no-first-use of nuclear weapons by all nuclear-armed states, implementation of the Comprehensive Test Ban Treaty (CTBT), and reduction of the number of nuclear warheads, which stands at over 20,000 now, to 2,000 or less. The report does not specify a timeline for nuclear abolition, saying that the realization of nuclear abolition will be sought as a longer-term objective beyond 2025.

The ICNND co-chairs, the former foreign ministers Yoriko Kawaguchi and Gareth Evans, visited the prime minister's residence and handed the report to Japanese Prime Minister Yukio Hatoyama and Australian Prime Minister Kevin Rudd, who is visiting Japan. Prime Minister Hatoyama expressed appreciation for their efforts, saying, "A guide that will lead the world toward peace has been prepared. The contents of the report are one or two steps ahead of the two governments."

The ICNND was established at the suggestion of Prime Minister Rudd with the purpose of building momentum for the Nuclear Non-proliferation Treaty (NPT) Review Conference next May and presenting recommendations at the NPT Review Conference. Fifteen ICNND commissioners and 27 members of the ICNND advisory board have convened a total of eight meetings, including regional meetings, and held discussions, starting with the meeting in Sydney in October 2008 to the meeting in Hiroshima in October 2009.

The report by the ICNND fell short of setting a deadline for the total abolition of nuclear weapons, and the gap between the ICNND's proposal and the goal of 2020 advocated by Mayors for Peace and other organizations was not bridged. Meanwhile, the ICNND report also spells out certain strong recommendations, such as urging the United States to set a limit on the role nuclear weapons play in its policy. Japan, the A-bombed nation which led the efforts of the ICNND alongside Australia, still relies on the U.S. "nuclear umbrella." The Japanese government's handling of this issue will be tested.

At the press conference held in Tokyo, Yoriko Kawaguchi, an ICNND co-chair, confidently described the report as "Idealistic, ambitious, and practical." "This is an action-oriented report," she said.

However, it cannot be said that the desire of atomic bomb survivors, who want to see nuclear weapons eliminated as swiftly as possible, has been reflected well in the report. Terumi Tanaka, secretary-general of the Japan Confederation of A- and H-bomb Sufferers Organizations, who attended a meeting for the purpose of exchanging views with the ICNND co-chairs at the Ministry of Foreign Affairs, said with regret, "Though the final meeting was held in Hiroshima, I could not feel from the report that the commission members truly understood the damage wrought by the atomic bombing."

On the other hand, the report mentions the necessity of nuclear weapon states and their allies decreasing their dependence on nuclear weapons in a phased manner. One policy in this regard is to limit the role of nuclear weapons to nuclear deterrence. Such is the premise for "no first use." The report suggests that the United States should "accept the principle that the 'sole purpose' of possessing nuclear weapons is to deter others from using such weapons against that state or its allies" in its Nuclear Posture Review.

This recommendation will press the Japanese government, which has sought the U.S. nuclear deterrence capability with North Korea in mind, to guard against attacks by biological and chemical weapons, to change its policy. A source at the Foreign Ministry of Japan revealed the behind-the-scenes story, stating, "Our ministry was out-negotiated by Gareth Evans, the other ICNND co-chair."

Mr. Evans has urged the Hatoyama Administration, which has not yet shared a clear stance on the U.S. nuclear umbrella, to send the message to the United States that Japan supports the limited role of nuclear weapons.

Joint statement by mayors of Hiroshima and Nagasaki and others criticizes ICNND report
by Keisuke Yoshihara, Staff Writer

In response to the ICNND report, seventeen people including Hiroshima Mayor Tadatoshi Akiba, Nagasaki Mayor Tomihisa Taue and representatives of NGOs released a joint statement which argues that "the pace (of the timetable for the abolition of nuclear weapons) is too slow."

Though the statement welcomes that "the report…recommends that the role of nuclear weapons in security policies be limited," it criticizes several aspects such as the fact that no clear deadline was set for the abolition of nuclear weapons. "The report falls short" of the expectations of civil society, the statement declares. It also stresses that "Governments should take the report's recommendations seriously, but aim to implement them ahead of the timetable outlined in the report."

In addition to the two mayors, the statement was signed by Terumi Tanaka, secretary-general of the Japan Confederation of A- and H-bombs Sufferers Organizations, Haruko Moritaki, co-director of the Hiroshima Alliance for Nuclear Weapons Abolition (HANWA), Rebecca Johnson, director of the Acronym Institute for Disarmament Diplomacy in the United Kingdom, and others.