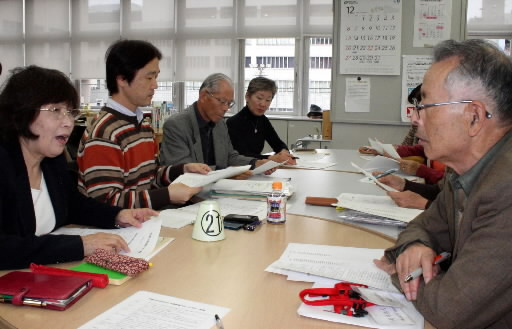 A Hiroshima-based volunteer group "Hiroshima Interpreters for Peace (HIP)" has marked the 25th anniversary of its establishment. Currently, 95 members consisting of housewives, office workers and atomic bomb survivors are making steady efforts such as interpreting A-bomb testimonies. The group will hold an anniversary celebration on December 19.

HIP began in December 1984 with 19 people. Keiko Ogura, 72, an A-bomb survivor who had experience in interpreting, became the group's leader. Since then, HIP has published and revised an English-Japanese dictionary entitled Hiroshima Handbook, and Hiroshima Eigo Annai ("Hiroshima Guide in English").

Recently, in response to requests from college students and trainees who visit Hiroshima from abroad, HIP members provide interpreting service for testimonies related by A-bomb survivors roughly 20 times a year. The members also meet once a month for study sessions to learn technical terms in English or for seminars to which they invite A-bomb survivors.

"Our members have been very enthusiastic about spreading the message of peace through our activities," Ms. Ogura said. "I hope young people will catch this enthusiasm."

The cerebration will be held at Cusco Café in downtown Hiroshima at 6 p.m. on December 19. The gathering is also open to those who wish to become interpreters. Reservations are necessary and the cost is 3,000 yen per person. Those who would like to attend, please contact Ms. Ogura by phone at 082-222-6103.