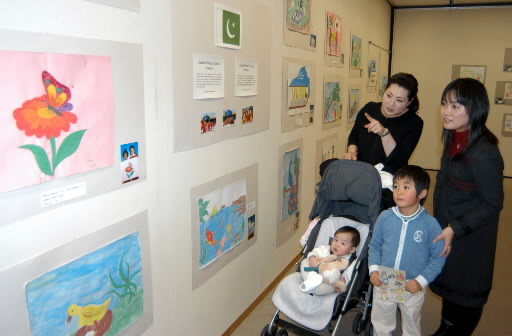 "Art Party," an event where artwork made by children in need is exhibited and sold to raise donations, opened at the Hiroshima Kenmin Bunka Center on December 18. The children include orphans who have lost their parents due to war or natural disaster and now live in children's shelters. The exhibition runs until December 22 and admission is free.

A total of 242 pictures from 11 countries, including India and Peru, are on display. The artwork ranges from pictures of landscapes and figures in bright colors to those of city streets destroyed by an earthquake and malnourished children.

Sadako Primary School, located in the northeastern part of Pakistan, is taking part in the event for the first time. The school was established by local residents of Kashmir who were inspired by the story of Hiroshima rising up from the ashes of the atomic bombing. Students at the school, who suffer from the poverty caused by conflict and the earthquake that struck the region in 2005, submitted 26 pictures for the exhibition.

Kaori Yamagata, 28, a resident of Hiroshima, studied the artwork and said, "I can feel the children's desire for peace from these pictures."

The event is organized by the Hiroshima-based NPO "ANT-Hiroshima" and other organizations and is now in its seventh year. Each picture is for sale for a contribution of at least 1,000 yen and the buyer can decide how much they would like to pay. All the proceeds from the exhibition will be donated to the participating children's groups.