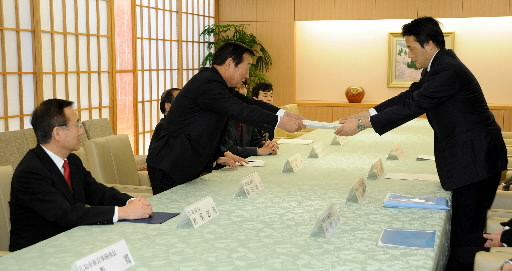 Hiroyuki Fujita and Takashi Yoshihara, chairmen of the Hiroshima and Nagasaki City Councils, submitted a package of proposals related to the Hiroshima-Nagasaki Protocol to the national government on December 21. The proposals, addressed to Prime Minister Yukio Hatoyama and speakers from both houses of the Diet, request that the Japanese government propose the protocol, which provides a road map toward the elimination of nuclear weapons by 2020, as a subject for discussion at the Nuclear Non-proliferation Treaty (NPT) Review Conference slated for next May.

The proposals, which also call for the national government's effort to persuade each nation to adopt the protocol at the conference, were approved during regular meetings of both city councils, respectively.

The city council chairmen of Hiroshima and Nagasaki visited the official residence of the prime minister and the Ministry of Foreign Affairs, together with Hiroshima Mayor Tadatoshi Akiba and Nagaski Mayor Tomihisa Taue. According to the chairmen, Foreign Minister Katsuya Okada, who accepted the proposals at his ministry, told them, "We will discuss how to handle the matter."