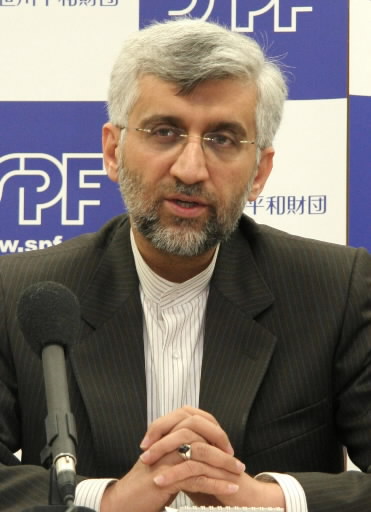 On December 22, Saeed Jalili, secretary of the Supreme National Security Council of Iran and the nation's top nuclear negotiator, spoke in Tokyo. In his speech, Mr. Jalili denied the allegation of Iran engaging in cooperation with North Korea in connection with nuclear technology. "That information is false," he said.

Mr. Jalili stressed that Iran, a signatory to the Nuclear Nonproliferation Treaty (NPT), is seeking the peaceful use of nuclear energy within the framework established by the International Atomic Energy Agency (IAEA). "Iran considers nuclear weapons unlawful," Mr. Jalili stated. "Thus, Iran is opposed to nuclear proliferation and has been demanding nuclear disarmament." Defending the peaceful purpose of Iran's nuclear development program, he said that, to meet the nation's electricity needs for the future, 20 nuclear power plants, each with a capacity of 1000 megawatts, are required.

Mr. Jalili had already expressed the nation's rejection of a proposal made by the IAEA and others that Iran transport its low-enriched uranium outside of the nation. In his remarks in Tokyo, too, he said, "If the rights of nonnuclear weapon states, abiding by the obligations of the NPT, are denied, this would lead to the weakening of the NPT regime. We must not allow the large powers to usurp these rights."