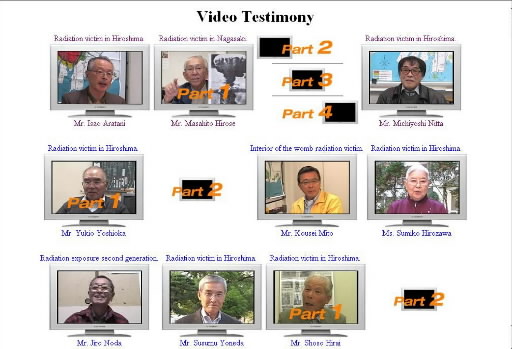 Video clips of A-bomb testimonies, which were related by survivors in English and had never been shown to the public before, were posted online on December 22. The testimonies were collected by Akihiko Ito, a former reporter for the Nagasaki Broadcasting Company (NBC), who passed away in March of this year at the age of 72.

Mr. Ito recorded the A-bomb testimonies of 17 people in Hiroshima, Nagasaki and Tokyo from November 2006 until near the time of his death. From these, nine testimonies were uploaded to YouTube. They can be accessed through the website that Mr. Ito created.

Toshinori Namba, 43, a Tokyo-based video artist who was familiar with Mr. Ito's desire to convey the voices of A-bomb survivors to the world, began editing the video clips this past October. Mr. Namba commented, "I selected footage from which viewers can grasp the tragic nature of the atomic bombings through the speakers' body language and the difficulty they have in describing their ordeals."