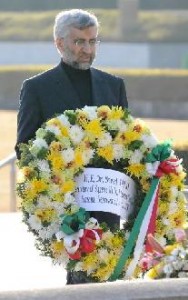 Saeed Jalili, 44, secretary of the Supreme National Security Council of Iran and the nation's top nuclear negotiator, came to Hiroshima on December 24. Mr. Jalili shared the idea of holding an international conference on nuclear disarmament and non-proliferation in the Iranian capital of Teheran.

Though details of the conference have not been determined, Iran plans to invite experts and intellectuals from around the world to the gathering. Upon meeting Hiroshima Mayor Tadatoshi Akiba at City Hall, Mr. Jalili explained the purpose of the conference and told the mayor they intended to invite him to participate. Mr. Akiba expressed his appreciation.

Prior to his meeting with the mayor, Mr. Jalili visited Hiroshima Peace Memorial Museum and offered a flower wreath at the Cenotaph for the A-bomb Victims. He also listened to the horror of the atomic bombing from Seiko Ikeda, 77, a resident of Hiroshima who was 12 years old at the time of the blast. "The most important message conveyed by Hiroshima is the call for the abolition of U.S. nuclear weapons," said Mr. Jalili. "President Obama should visit Hiroshima as soon as possible to face up to what the United States did and apologize to the people of Hiroshima and Japan and the entire world."