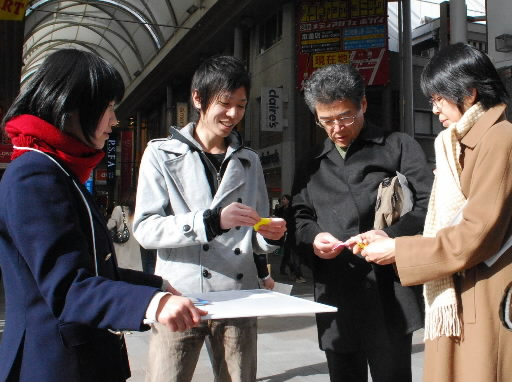 Junior high and high school students who are members of the "No Nuke Network: Students of Hiroshima Against Nuclear Weapons," a student group calling for the abolition of nuclear weapons, conducted a street campaign in a downtown shopping district on December 26 to ask citizens to fold paper cranes. Though the group has already collected more than 30,000 cranes, surpassing the target number of 23,000, they are appealing for further support. They believe that an even larger number of paper cranes will more strongly symbolize the ardent desire of Hiroshima citizens for nuclear abolition.

Standing along the street, about 20 students shared the aim of their activity to passersby, explaining that they intend to deliver a larger number of paper cranes to U.S. President Barack Obama than there are nuclear weapons in the world and urge him to visit Hiroshima. They passed out sheets of paper to shoppers and others and asked for their cooperation. Chieko Yamada, 69, a Hiroshima resident, expressed her support to the students, commenting, "It's wonderful to see young people making such efforts. I plan to fold paper cranes at home and deliver them to the students."

To conclude their activities for this year, the group will again undertake a street campaign from 11 a.m. for two hours on December 27 around the east end of Hondori Shopping District.