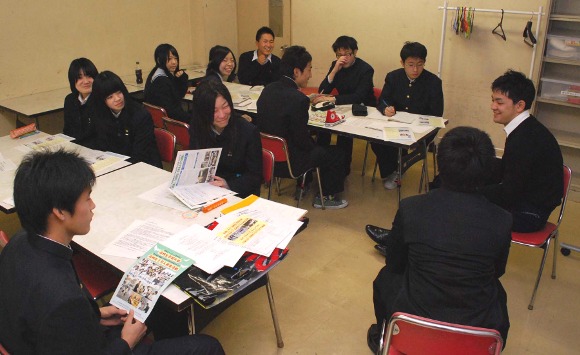 On January 30, junior high and high school students who jointly created a peace declaration last November decided to send their statement to the leaders of the world's countries and regions. They plan to disseminate the declaration by the end of February.

About ten members of the "No Nuke Network: Students of Hiroshima Against Nuclear Weapons" and three members of the "10,000 High School Students Signatures Campaign Executive Committee," who were visiting Hiroshima from Nagasaki, gathered to share ideas at the Hiroshima Youth Center. They decided that they will send the declaration to the leaders of 194 nations and regions, covering all member states of the United Nations and Taiwan and Palestine.

The declaration entitled "To the People of the World" conveys the sentiments of junior high and high school students in the A-bombed cities and pledges to act toward the realization of peace. It has already been translated into nine languages including English, Chinese, and Arabic. All nine language versions, along with the Japanese original, will be compiled into one booklet and then sent to government offices overseas or embassies in Japan.

Mitsuhiro Hayashida, 17, a second-year student at Nagasaki Kita High School, expressed enthusiasm for the project, saying, "I have hope that things will change when our sentiments from the A-bombed cities reach the political leaders."