Effort to promote effective use of 130,000 A-bomb memoirs held by Peace Memorial Hall 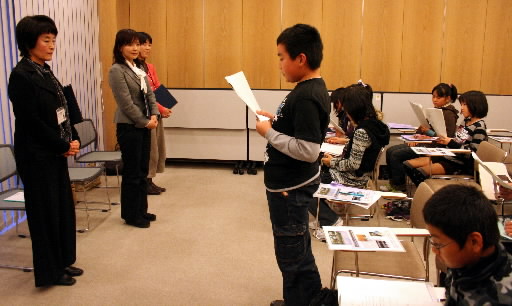 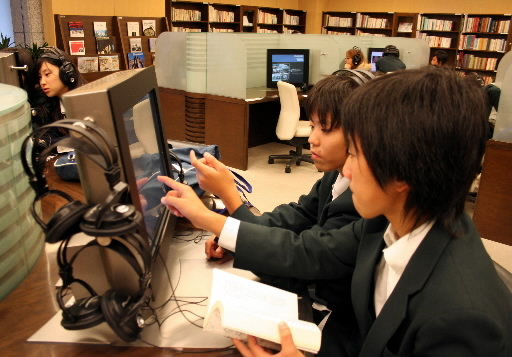 “Shards of glass pierced my entire body and cut my skin, causing blood to spurt out.”

“I don’t want to think about it, but I really want the children of today, who can’t believe this sort of thing happened, to know how terrible war is.”


200 readings this year
On November 17, Hiroko Morikawa, 70, and two other volunteers read memoirs of the atomic bombing to 11 sixth graders from Takawa Elementary School in Kobe, who visited Peace Memorial Hall on a field trip. Afterwards the students read poems written about the bombing.

As part of its effort to pass on the story of the atomic bombing, Peace Memorial Hall has been holding volunteer readings like this since fiscal year 2005. Regular readings for visitors to the facility are held monthly, while volunteers travel to schools and other locations to conduct readings there. This fiscal year the total of such readings is expected to top 200.

“I feel as if I have important letters in my keeping,” Ms. Morikawa said. “I read them with feeling.”

For the past three years students from Takawa Elementary School have taken field trips that include readings. Nobuyoshi Kanase, 57, the school principal, emphasized their significance and benefits. “By reading aloud themselves, it is easier for the children to recreate the horror of the atomic bombing in their minds.”

Yuko Imaoka, 43, one of the volunteer readers, said, “In some cases when children hear accounts of the A-bomb experience directly from the survivors, it is too shocking for them. If the accounts are read to them, the kids can absorb them slowly and gently.”

Since July, Peace Memorial Hall has been making a serious effort to translate the memoirs into more languages so that more foreign visitors can read them in their native languages. Six memoirs have been translated into Italian, Spanish, German, French, Portuguese, Russian, and Thai in addition to the original English, Chinese, and Korean, for a total of 10 languages. Kazuyuki Iwakawa, 62, director of the hall, said, “In order to call for the support of people throughout the world in our effort to abolish nuclear weapons, I would like to translate the memoirs into even more languages.”

Nevertheless, the facility attracts only about 200,000 visitors a year, a figure that has remained relatively unchanged since the hall opened in 2002. In fiscal 2009 as well, when the movement for the abolition of nuclear weapons gained global momentum, Peace Memorial Museum had more than 1.4 million visitors for the first time in 13 years whereas Peace Memorial Hall had only 214,000, a decline of 0.3 percent from the previous fiscal year.


Similarity pointed out
Peace Memorial Hall’s similarity to Peace Memorial Museum has been pointed out ever since its opening, and there were concerns that the facility was redundant. Both facilities, for example, have videos of A-bomb accounts.

The City has stated that the role of Peace Memorial Hall is to allow visitors who first visit Peace Memorial Museum and may be shocked by the photographs of the destruction and the belongings of victims that they see there to quiet their minds and sort out their feelings in its Hall of Remembrance. The city is considering several projects, including the construction of a walkway that would link the two facilities.

Mr. Maeda also proposes that research studies be conducted using the memoirs in the collection of Peace Memorial Hall, such as an analysis of the relationship between the passage of time since the atomic bombing and the changes in the feelings of the survivors.

Yoshie Funahashi, professor emeritus of the history of social thought at Hiroshima University, said, “The atomic bomb survivors experienced an unprecedented event, and the accounts that they worked so hard to write represent nothing more or less than Hiroshima’s plea for the abolition of nuclear weapons.” While lauding the growing number of readings, Ms. Funahashi pointed out the need to give the 130,000 memoirs in Peace Memorial Hall’s collection, which convey the feelings of the A-bomb survivors, even more weight by supporting the survivors in their efforts to record their experiences and through other projects.