Prime minister of Bangladesh vows to act for nuclear abolition 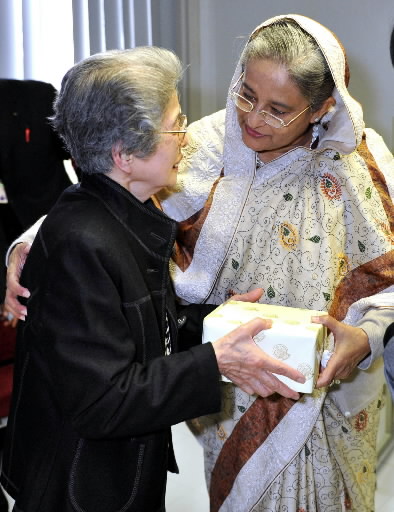 On November 30, Sheikh Hasina, the prime minister of Bangladesh, visited Hiroshima Peace Memorial Park. As prime minister of a nation that lies near India and Pakistan, both nuclear weapon states, Ms. Hasina vowed to take action to advance the abolition of nuclear arms.

The prime minister toured Peace Memorial Museum and offered flowers at the Cenotaph for the A-bomb Victims. She then met with Yoshiko Kajimoto, 79, who has been commissioned by the Japanese government to serve as a "Special Communicator for a World without Nuclear Weapons." Ms. Hasina listened to Ms. Kajimoto’s account of the atomic bombing at the International Conference Center Hiroshima.

Ms. Kajimoto suffered serious injuries in the bombing while in the Misasa-cho district in Nishi Ward, 2.3 kilometers from the hypocenter. She told the prime minister: “As many as 140,000 people were the victims of unwarranted death. Please help us so that nuclear weapons can be eliminated as soon as possible.” Moved by Ms. Kajimoto's account, Ms. Hasina went to her and put an arm around her.

At a press conference held later, Prime Minister Hasina touched on her experience of urging both India and Pakistan to ease tensions. This occurred in 1998 when the two nations were competing in their quest to conduct nuclear tests. She went on to say that her visit to Hiroshima enabled her to realize the horrific consequences that nuclear weapons can cause, and she pledged to make every effort for peace.