New monument for A-bomb victims is unveiled in Okayama 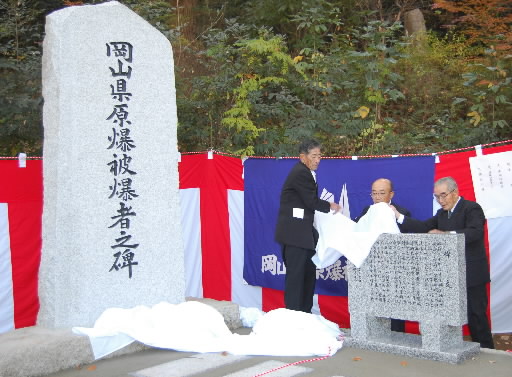 The new monument was unveiled on December 1 and the ceremony was attended by about 20 members of the group. Kaname Senoo, 79, the president of the association, spoke at the ceremony and said, “We built a new monument at a very favorable location in order to pass on the history of the atomic bombing to the next generation. The monument can be visited easily, which means more people will have the opportunity to see it.” The board members of the association unveiled the monument and the stone inscribed with the process involved in raising the new tribute.

The monument is located to the side of the street leading to Gokoku Shrine. The site was provided by the city. The monument is made of granite and stands 2.8 meters tall, including the base, and 1 meter wide. About 2.5 million yen was used to construct the monument and this cost was covered by a fund of the association members, donations, and a subsidy from the prefecture.

The Okayama Prefectural A-bomb Monument was built in 1972. The road leading to the monument, about one kilometer from the center of Takahashi City, has a steep incline. Since 1998, when memorial services began to be held at the foot of the hill, fewer people would visit the monument. Prior to 1998, memorial services were held in front of the monument.

“Now that the new monument has been built at a location that is easy to visit,” said Mr. Senoo, “people will remember that there were A-bomb victims who lived in Okayama Prefecture, even long into the future.”