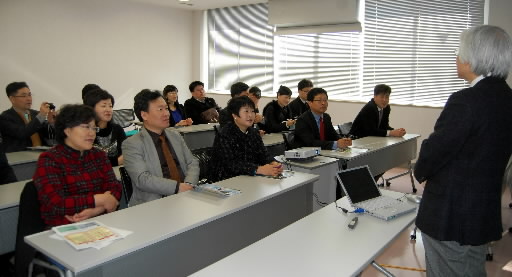 On December 2, a group of 15 Korean doctors, nurses, and researchers, engaged in the treatment of those who have been exposed to radiation, visited Hiroshima University Hospital and Research Institute for Radiation Biology and Medicine (RIRBM) to learn about emergency medical practices in the event of a nuclear power plant disaster.

The group from South Korea is visiting Hiroshima at the invitation of the Hiroshima International Council for Health Care of the Radiation-exposed (HICARE), an organization formed by Hiroshima University, Hiroshima Prefecture, the City of Hiroshima, and other entities. The group visited the Hiroshima University Hospital Advanced Emergency and Critical Care Center, which receives patients with severe diseases. At RIRBM, Kenji Kamiya, the director of the institute, spoke to the group about the latest research regarding the correlation between those exposed to radiation and the development of cancer as well as RIRBM’s system for providing emergency medical care if a disaster should occur at a nuclear power plant.

Yoo Jae Ryong, 31, employed at the Korea Institute of Radiological & Medical Science (KIRAMS), said he was impressed by the emergency system, noting its similarity to practices in South Korea but saying that it included closer ties to local hospitals.

December 2 was the last day of the group’s two-day training in Japan. During this time they also visited Peace Memorial Museum and the Radiation Effects Research Foundation.