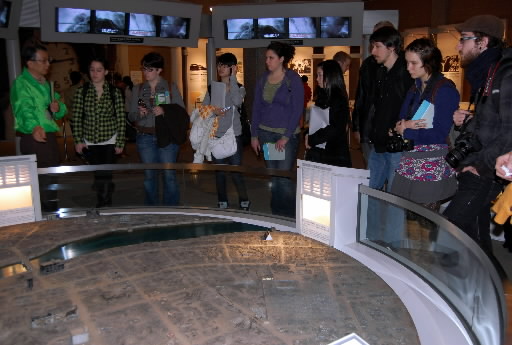 On December 6, a group of 20 students from DePaul University, located in the U.S. city of Chicago, visited Hiroshima Peace Memorial Museum and learned about the horrific consequences of the atomic bombing. Their visit to Hiroshima came in connection with the “Hiroshima-Nagasaki Peace Study Course.” The City of Hiroshima and the City of Nagasaki have encouraged universities both in Japan and abroad to establish this course in peace studies.

The American students looked at such exhibits as a panoramic model of downtown Hiroshima, which depicts the complete devastation of the city center in the aftermath of the blast, while listening to the explanation offered by a peace volunteer of the museum.

Edmund Wright, 23, a senior and physics major at DePaul, said that he became aware of the great scale of the devastation caused by the atomic bomb for the first time. He went on to say that he feels nuclear weapons should be eliminated.

Yuki Miyamoto, 42, an assistant professor at DePaul University, has been in charge of the study course since 2005. She is originally from Hiroshima and is a second-generation A-bomb survivor.