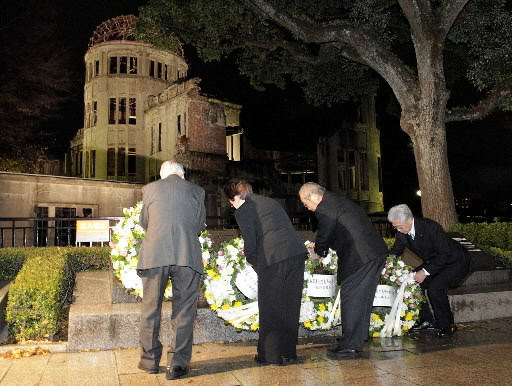 A gathering to commemorate the 14th anniversary of the registration of the Atomic Bomb Dome on UNESCO's list of World Heritage sites was held in front of the dome on the evening of December 7. The Hiroshima Peace Liaison Conference for Nuclear Abolition, consisting of 12 organizations including labor unions and A-bomb sufferers’ organizations, sponsored the event, and about 100 people took part.

Yukio Itami, chairman of the Hiroshima Local of Japanese Trade Union Confederation spoke at the start of the gathering, saying, “Today, the day the A-bomb Dome was added to the list of World Heritage sites, is an important day to appeal to the world for peace.” Representatives from each organization offered wreaths of flowers and water in front of the dome. A silent prayer was then made by all those in attendance. To the accompaniment of a keyboard and flute, they pledged to continue engaging in peace activities at the site.

Closing the event, Sunao Tsuboi, chairman of the Hiroshima Prefectural Confederation of A-bomb Sufferers Organizations, offered these words: “The silent A-bomb Dome stands here to help bring about eternal peace. I vow not to give up the pursuit of nuclear abolition.”

The A-bomb Dome was added to the list of World Heritage sites on December 7, 1996. The Hiroshima Peace Liaison Conference for Nuclear Abolition has been holding this commemorative gathering annually since 2001, which marked the 5th anniversary of the dome’s registration.