Afghan journalist speaks in Hiroshima about his nation’s plight 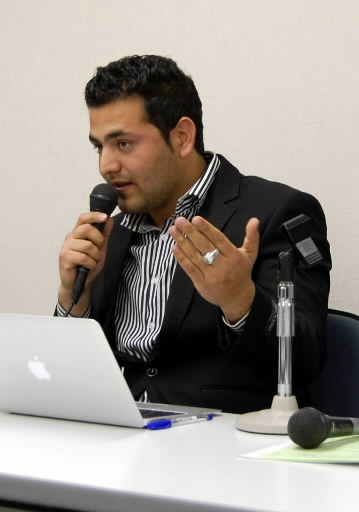 On the evening of December 7, a lecture was held at Hiroshima Peace Memorial Museum with Ibrahim Alkozai, 22, an Afghan journalist.

Mr. Alkozai spoke about the plight of his nation perpetually in conflicts at the invitation of the NO DU Hiroshima Project, a citizens’ group seeking to ban the use of depleted uranium weapons. He is currently working as a freelance journalist after serving as a correspondent in Afghanistan for the Japanese and U.S. media.

Showing photos of dead babies that were killed in U.S. operations in Afghanistan to sweep out the Taliban regime, as well as those of impoverished children, Mr. Alkozai noted the lack of water, food, and clothing and stressed the serious poverty plaguing Afghanistan. He called on the audience to send doctors to Afghanistan, instead of soldiers, because the nation needs hospitals, not military bases.

He also reported that Afghan doctors have warned that depleted uranium weapons, allegedly used by U.S. forces, are having harmful effects on newborn babies.