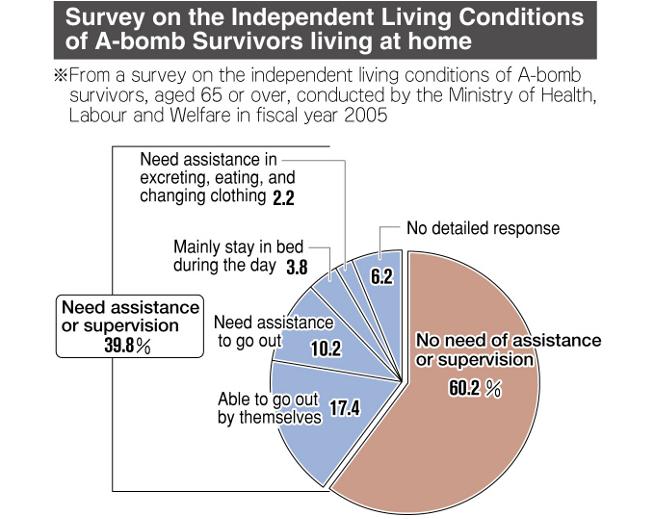 On December 9, the Ministry of Health, Labour and Welfare has announced the results of a survey on the independent living conditions of A-bomb survivors that was conducted in fiscal year 2005. According to the survey, 40% of A-bomb survivors aged 65 or older who still live at home require some type of assistance or supervision. This figure is triple the rate of non-survivors of a similar age. A-bomb survivors living overseas were surveyed as well, for the first time, and 75% responded that they have worries about the effects on their health from their exposure to radiation from the atomic bombings.

The domestic survey has been conducted every 10 years since 1965. This time, marking the fifth survey, the survey sheets were mailed to about 65,000 A-bomb survivors, which amounts to 25% of all holders of the Atomic Bomb Survivor's Certificate as of September 1, 2005. The response rate was 74.8% and the average age of the respondent was 73.5, 6.6 years older than those surveyed in 1995.

Of the A-bomb survivors living at home who responded to the survey, 39.8% said that they need some type of assistance or supervision. In comparison, the same question in the National Livelihood Survey, which tracks non-survivors, yielded a rate of only 11.8% for those aged 65 or older.

A-bomb survivors, in fact, marked higher percentages in all four categories of independent living conditions compared to their counterparts in the National Livelihood Survey: 3.8% of the surveyed A-bomb survivors mainly stay in bed during the day and 2.2% survivors need assistance when excreting, eating, and changing clothing. In the previous survey of A-bomb survivors, a total of 9.1% answered that they are bedridden or often stay in bed, though the questions in that survey were different from those in the 2005 survey and thus the responses cannot necessarily be compared.

Meanwhile, about 3,000 A-bomb survivors living overseas were surveyed, including those who have obtained the Atomic Bomb Certificate of Acknowledgment, which can be converted to the Atomic Bomb Survivor’s Certificate. The response rate was 82.2% and the average age of those surveyed was 69.9. About 60% responded that they require assistance or supervision in their daily lives at home. With regard to their worries, the most prevalent answers involved “my health and my family’s health,” “my life after retirement,” and “financial difficulties.” The percentage of overseas survivors who had received medical treatment in Japan was 37%.

The results of the latest survey took five years to complete. The General Affairs division of the Health Service Bureau of the Ministry of Health Labour and Welfare explained that it had been consumed with reviewing the criteria for A-bomb disease certification as well as handling the rapid rise in applications for the Atomic Bomb Survivor’s Certificate.

Terumi Tanaka, secretary general of the Japan Confederation of A-and H-Bomb Sufferers Organizations, commented: “It’s clear that the health of A-bomb survivors is worse than that of other elderly. I wonder how far this difference can be reflected in actual policy, though, when it takes as many as five years for the survey results to be made available.”