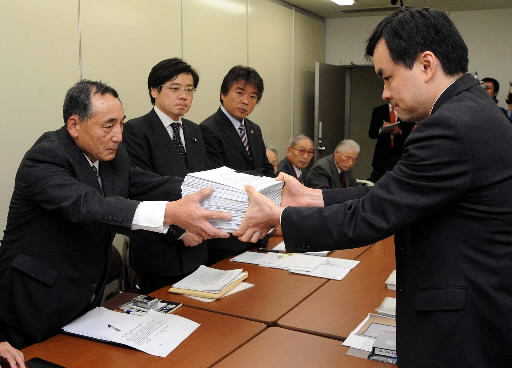 On December 13, the Hiroshima Prefecture Atomic Bomb Black Rain Council called on the Ministry of Health, Labour and Welfare to expand the “heavy rain area” of the black rain (the so-called Health Examination Special Designated Area) to the entire area where the black rain fell in the aftermath of the atomic bombing. They produced a petition with the signatures of 6,350 people to support their cause.

For those who reside in the designated black rain area, the government covers the cost of health check-ups. The ministry said it plans to conduct a verification of the black rain area by experts within this year.

The 12 members of the council, including Masaaki Takano, 72, chairman, visited the ministry to make their appeal. The members argued that the results of studies conducted by the City of Hiroshima and other entities show that the heavy rain area is six times the size of the current designated area and they called for the designated area to be expanded. Yasunori Wada, director of the A-bomb Survivors Support Office at the ministry, responded, “It is important to study the matter based on scientific views. We will make efforts so that a committee can study the matter within this year.”

Mr. Takano said, “I would like the experts to visit Hiroshima when undertaking their study so that the issue can be solved, based on the facts, as soon as possible.”