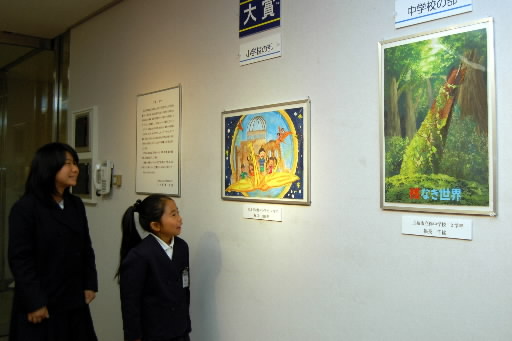 On December 18, an exhibition of art by elementary school and junior high school students, pictures that were prize-winning entries in “The 25th Children’s Peace Picture Contest” organized by the City of Hiroshima and other entities, opened at the East Building of Hiroshima Peace Memorial Museum. The exhibition will run until January 31, 2011.

Of the 5,936 works entered in the contest from children in the city of Hiroshima, as well as in eight countries including the United States and Russia, 162 pictures that were awarded prizes, among them the three first prize winners, are on display. Chiemi Higuchi, 9, a fourth grader at Bairin Elementary School in Hiroshima, was a first prize winner for her vivid water color depiction of children flying on the backs of paper cranes.

The awards ceremony was also held on the opening day of the exhibition. Thirty-four students who won the first prize and second prize attended the event. Chihiro Fukunaga, 14, a second-year student at Tomo Junior High School in Hiroshima, was another winner of the first prize for her picture which shows a rusty nuclear weapon in a forest. She said, “I hope nuclear weapons become things of the past, like the one in my picture, as soon as possible.” The other first prize went to an elementary school student in the city of Daegu, South Korea.