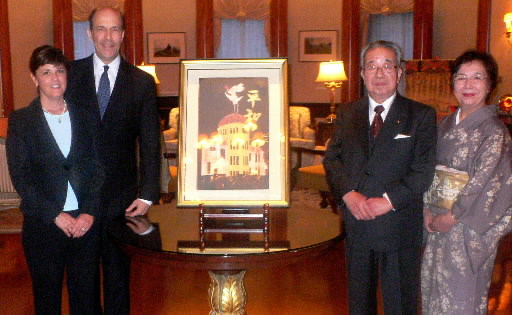 On December 21, Masayuki Imai, 79, visited U.S. Ambassador to Japan John Roos at the U.S. ambassador’s residence in Tokyo and asked Mr. Roos to present U.S. President Barack Obama with a picture he made from porcelain that expresses his wish for peace. Mr. Takei is originally from the town of Takehara, close to the city of Hiroshima, and now lives in Kyoto. He was awarded the Chugoku Culture Prize this year.

The framed picture, 75 centimeters high by 54 centimeters wide, was made by using clay from Higashi Hiroshima. The clay was mixed with various colors to form the image of the A-bomb Dome and a crane, a symbol of peace. Mr. Imai also engraved the work with the Chinese characters for “peace.”

Mr. Imai was impressed by Mr. Obama’s speech in Prague in April 2009 in which he called for a world without nuclear weapons and decided to create the picture for the president.

Ambassador Roos reportedly promised that he would send the picture to the White House, saying the president would find it impressive. Mr. Imai said, “I would be pleased if President Obama might strengthen his determination to eliminate nuclear weapons by looking at my picture.”