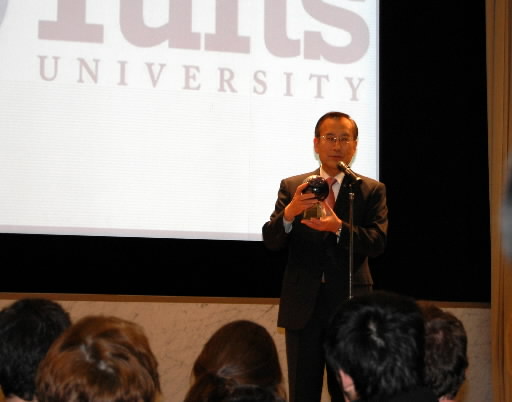 Hiroshima Mayor Tadatoshi Akiba was presented the Dr. Jean Mayer Global Citizenship Award for 2011 from Tufts University, a college in the U.S. state of Massachusetts and the sponsor of the award. Mr. Akiba was once an associate professor at the university.

The award ceremony was held at the East Building of Hiroshima Peace Memorial Museum on January 5.

The ceremony took place in conjunction with a study program on nuclear issues offered by Tufts University that brought U.S. high school students and people from the university, 31 in total, to Hiroshima. Mayor Akiba was presented with a trophy by a representative of the students and pledged to continue working for nuclear abolition by the year 2020.

The award was established in 1993 in honor of Dr. Jean Mayer, former president of Tufts University. To date, such figures as Shirin Ebadi, the Iranian human rights activist and Nobel Peace Prize laureate, have been presented with the award. Mayor Akiba was given the prize to acknowledge his efforts for nuclear abolition through such entities as Mayors for Peace, a worldwide network of cities.

Prior to the ceremony, the mayor delivered a speech entitled “Toward a World without Nuclear Weapons” to about 150 people, including those taking part in the study program and city employees in attendance.