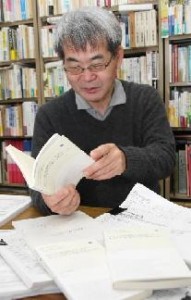 The Junod Society, a citizens’ group that has been engaged in providing aid to victims of the Chernobyl nuclear power plant disaster, has published the first volume of a book which consists of a compilation of “Like Dr. Junod,” the group’s newsletter. The society plans to publish subsequent volumes every few months to capture its 20-year history.

The Junod Society was established in 1990. Its first newsletter was issued in January 1991, and the group has now issued its 114th newsletter. The first volume is entitled “Send Doctors from Hiroshima to Chernobyl and Send Children from Chernobyl to Hiroshima,” and is comprised of the first 10 newsletters issued up to January 1992. It is 206 pages in length and is priced at 1,500 yen plus tax.

The book describes the activities of the society from its inception to its effort that involved bringing children from Chernobyl to Hiroshima after Japanese doctors were dispatched to Chernobyl for the first time in 1991. To convey the trials and errors of those days, few corrections were made to the information found in the newsletters, which was recorded by those involved in the activities, when the newsletters were compiled into book form.

Jiritsu Shobo, a publishing company in Tokyo that specializes in materials involving art, theater, and literature, approached Hitoshi Kai, chairman of the Junod Society, about compiling the newsletters for a book. In preparation for publishing the second volume of the series, the society is seeking volunteers to input the old newsletters into a computer.

The group is aiming to grow into an organization that can aid radiation victims worldwide. Mr. Kai commented, “When the Junod Society was established, we had difficulty winning support for international humanitarian aid. Our struggles will surely be a helpful reference for others who are engaged in citizens’ activities.”

The book is on sale at major bookstores nationwide. For further details, please contact the Junod Society at 0847-45-0789.

The Junod Society
The Junod Society was named after Marcel Junod (1904-61), a Swiss doctor who brought 15 tons of medical supplies into Hiroshima and treated A-bomb survivors in the aftermath of the atomic bombing. Inspired by Dr. Junod’s spirit, the organization was established in 1990 to aid the victims of the 1986 nuclear power plant disaster at Chernobyl. It currently has about 500 members across the nation. (Originally published on January 6, 2011)