Youth from Hiroshima and Nagasaki join forces for nuclear abolition 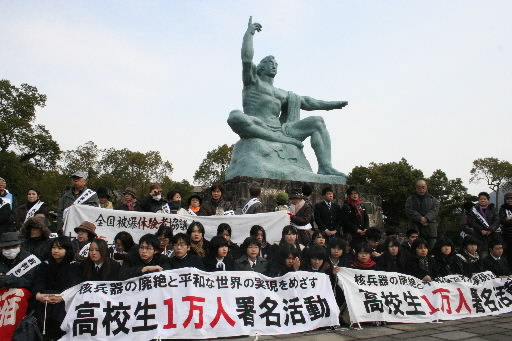 The members of the No Nuke Network took part in a sit-in demonstration that is held on the 9th of every month in Nagasaki Peace Park, located at the hypocenter of the atomic bombing of Nagasaki. The sit-in is coordinated by A-bomb survivors and others in the city. Members of the executive committee of a Nagasaki group seeking to collecting signatures in support of nuclear abolition from 10,000 high school students also joined the day’s demonstration.

After the sit-in, the youth of both cities held a meeting at the Nagasaki Prefectural Education and Culture Center. The participants discussed the future direction of their efforts, including opportunities to appeal for nuclear abolition and peace both at home and abroad through joint peace gatherings and discussion meetings. During the exchange, the young people from Hiroshima and Nagasaki reaffirmed their desire to continue working together for their cause.

Takuya Bajo, 17, a second-year student at Hiroshima Gakuin Senior High School, said, “We have agreed how we will convey a message of peace through our collaboration. I’m eager to work together with the students in Nagasaki to help eliminate nuclear weapons.”

The students from Nagasaki plan to visit Hiroshima during their spring vacation. Masanori Aoki, 17, a second-year student at Nanzan High School, said with enthusiasm, “I hope by raising our voices, the youth from the A-bombed cities, we can help create strong momentum in the world for nuclear abolition.”

When they arrived in Nagasaki on January 8, the junior high and high school students from Hiroshima listened to a talk given by Hideo Tsuchiyama, 85, former president of Nagasaki University. Mr. Tsuchiyama remarked to the students, “I would like you to persuasively challenge the theory of nuclear deterrence.”