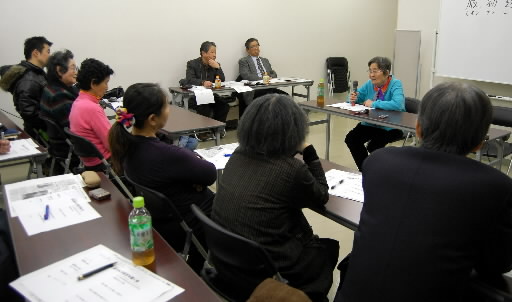 On January 10, a gathering to hear the A-bomb account of Eom Bun Nyeon, 82, a resident of Hapcheon, South Korea who initiated a movement of A-bomb survivors in South Korea in the 1960s, was held at Aster Plaza in downtown Hiroshima. Ms. Eom urged the audience: “Please show interest in the many people who have been harmed by nuclear weapons so that they are never used again.”

Ms. Eom was exposed to the atomic bombing when she was a fourth-year student at Yasuda Girls’ High School. Along with schoolmates, she was working outdoors as a mobilized student, about 1.7 kilometers from the hypocenter, and suffered severe burns on her back and legs. She returned to Pusan, South Korea in December 1945.

In her account, Ms. Eom looked back on her efforts which led to the founding of the initial incarnation of the South Korean Atomic Bomb Sufferers Association in 1967. She recalled visiting A-bomb survivors living in poverty and facing discrimination while she herself was afflicted by the pain which accompanied the treatment of her burns.

Ms. Eom was also the first A-bomb survivor living abroad to apply for the Atomic Bomb Survivor’s Certificate. She did this in 1968, while calling for survivors overseas to benefit from the same relief measures as her Japanese counterparts. She also shared her experience of petitioning the Japanese government to recognize A-bomb survivors in South Korea as having radiation sickness as well as providing them with the opportunity to receive treatment in Japan.

“The Japanese government should provide us with assistance since we were caught up in the war that Japan had started,” she said. She went on to stress: “To help realize peace in the world, it’s our duty to convey our A-bomb experience to others.”

Ms. Eom arrived in Japan on January 8 to serve as a witness for Ra Mu Yeon, a verification needed for Ms. Ra to obtain the Atomic Bomb Survivor’s Certificate. Ms. Eom became reunited with Ms. Ra, 72, two years ago, the first time the two women had met in 64 years. The gathering which featured Ms. Eom’s A-bomb account was organized by the Hiroshima branch of the Association of Citizens for the Support of South Korean Atomic Bomb Victims, for which Keisaburo Toyonaga serves as director. Forty people attended the event.