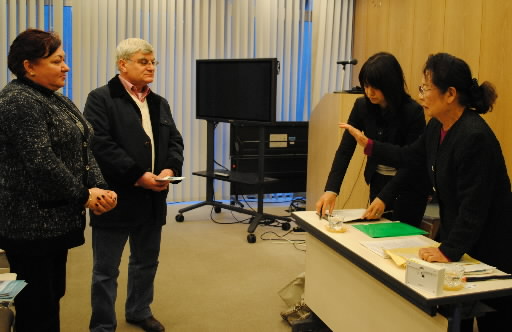 On January 10, Ion Botnaru, director of the U.N. General Assembly, visited Hiroshima Peace Memorial Park and the Cenotaph for the A-bomb Victims. He also listened to an account of the atomic bombing offered by an A-bomb survivor, and renewed his determination to seek peace.

With his wife Ludmila, Mr. Botnaru toured such locations as Peace Memorial Museum. Mr. and Mrs. Botnaru then visited Hiroshima National Peace Memorial Hall for the A-bomb Victims and listened to the A-bomb account of Seiko Ikeda, 78, a "Special Communicator for a World without Nuclear Weapons," a designation made by the Ministry of Foreign Affairs of Japan (MOFA), who was exposed to the bombing at the age of 12 near the hypocenter.

Mr. Botnaru and his wife listened closely and nodded as Ms. Ikeda shared her experiences connected to the blast, including undergoing plastic surgery as many as 15 times for the severe burns she suffered to her face.

Mr. Botnaru said he knew that the city was damaged in the A-bomb attack, but his visit to Hiroshima had left him with a keener understanding of the horrific consequences wrought by the bombing. He went on to say that he plans to relate the A-bomb damage to his friends and family.

Mr. Botnaru is visiting Japan for nine days from January 4 at the invitation of MOFA. His visit to Hiroshima is reportedly his first to the city.