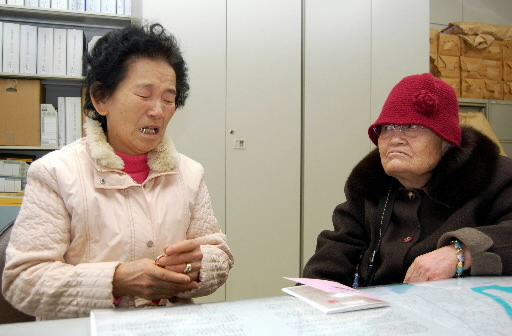 by Yumi Kanazaki On January 12, Ra Mu Yeon, 72, a resident of Hapcheon, South Korea who experienced the atomic bombing of Hiroshima, received her Atomic Bomb Survivor’s Certificate at City Hall. Ms. Ra is visiting Japan with Eom Bun Nyeon, 82, who served as Ms. Ra’s witness for her A-bomb experience, a verification needed to process applications for the Atomic Bomb Survivor’s Certificate. In the aftermath of the bombing, the two women lost contact with each other, but 64 years later fate brought them back together.

Ms. Ra’s father was working for Ms. Eom’s father, who ran a construction company. Ms. Ra and Ms. Eom lived in the neighboring buildings, located about 2 kilometers from the hypocenter, and the two were like sisters. Ms. Ra was exposed to the bombing while at home. As she was fleeing, she passed Ms. Eom, who had been at a work site for mobilized students. After that, she lost contact with Ms. Eom and returned to South Korea with her parents in 1945.

Ms. Ra was reunited with Ms. Eom in April 2009 when Ms. Eom moved into a facility for A-bomb survivors in Hapcheon, where Ms. Ra has been residing. Throughout her life, Ms. Ra has faced discrimination due to her exposure to the atomic bombing and has been burdened by the trauma of her A-bomb experience. She had been unable to locate someone to serve as a witness and was about to abandon her hope of obtaining the Atomic Bomb Survivor’s Certificate when she encountered Ms. Eom.

Ms. Ra held her certificate and broke into tears at City Hall, saying, “This will lighten my worries about my health to some degree. I intend to visit my parents’ graves and share my news with my father, who died six months after being exposed to the bombing, and my mother, who passed away 30 years ago without knowing anything about the Atomic Bomb Survivor’s Certificate.” Ms. Eom, who obtained her own certificate about 30 years ago, said, “I’m really glad that I could be of help to my friend.”