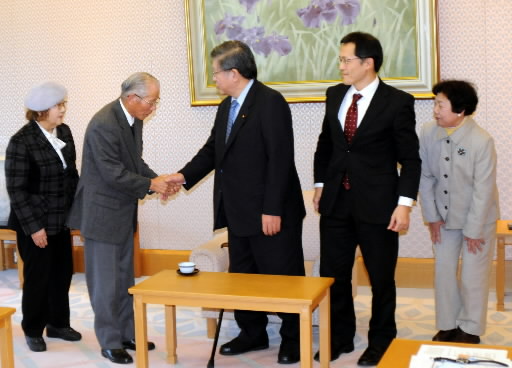 On January 13, A-bomb survivors who plan to take part in a voyage around the world in which they will relate their accounts of the atomic bombing met with Takahiro Yokomichi, speaker of Japan’s House of Representatives, at his official residence. The survivors called on the Diet to act proactively for the cause of nuclear abolition.

Three A-bomb survivors and one second-generation A-bomb survivor met with Mr. Yokomichi. Shoso Hirai, 81, a resident of Fuchu in Hiroshima Prefecture, shared his hopes for the voyage and told the speaker, “As the speaker of the A-bomb nation of Japan, please spearhead the international effort to abolish nuclear weapons.”

Emiko Yamanaka, 76, a resident of Kure, Hiroshima Prefecture looked back at a lifetime of struggle with A-bomb disease and said, “Please take action to achieve the abolition of nuclear weapons as soon as possible.”

After explaining his effort to urge the speakers of other nations to visit the A-bomb cities, Mr. Yokomachi said, “Nuclear weapons should be eliminated at the earliest possible date.”

This will be the fourth global voyage organized by the NGO Peace Boat. Eight A-bomb survivors and one second-generation A-bomb survivor, who have been commissioned by the Japanese government to serve as "Special Communicators for a World without Nuclear Weapons," will board a large ship and leave from the Port of Yokohama on January 23. They will visit 16 nations and return to Japan on April 18.