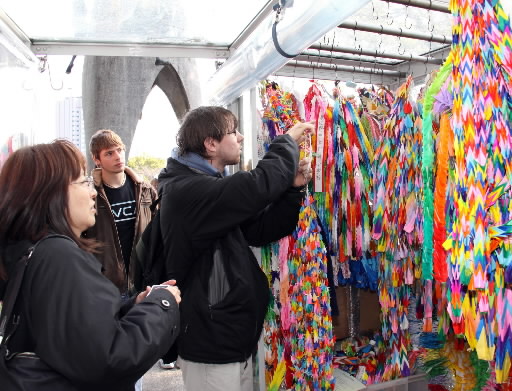 On January 14, six students from Buena Vista University in the U.S. state of Iowa visited Peace Memorial Park in downtown Hiroshima and offered a cluster of 1,000 paper cranes they had folded to the Children’s Peace Monument.

Yuriko Togashi, 48, a lecturer of Japanese language at the university, introduced the story of Sadako Sasaki last November as part of a peace education program. The monument was modeled after Sadako, a 12-year-old girl who died from radiation-induced leukemia ten years after her exposure, at the age of two, to the radiation released by the atomic bomb. Ms. Togashi encouraged her students to fold 1,000 paper cranes and bring them to Hiroshima. It took them one month to finish folding all the cranes.

The students also visited the A-bomb Dome and Peace Memorial Museum. Corbet Butler, 21, a senior at the university, said he now clearly understood that the atomic bombing caused horrific consequences. He went on to say that, as an American, he should never forget this fact.